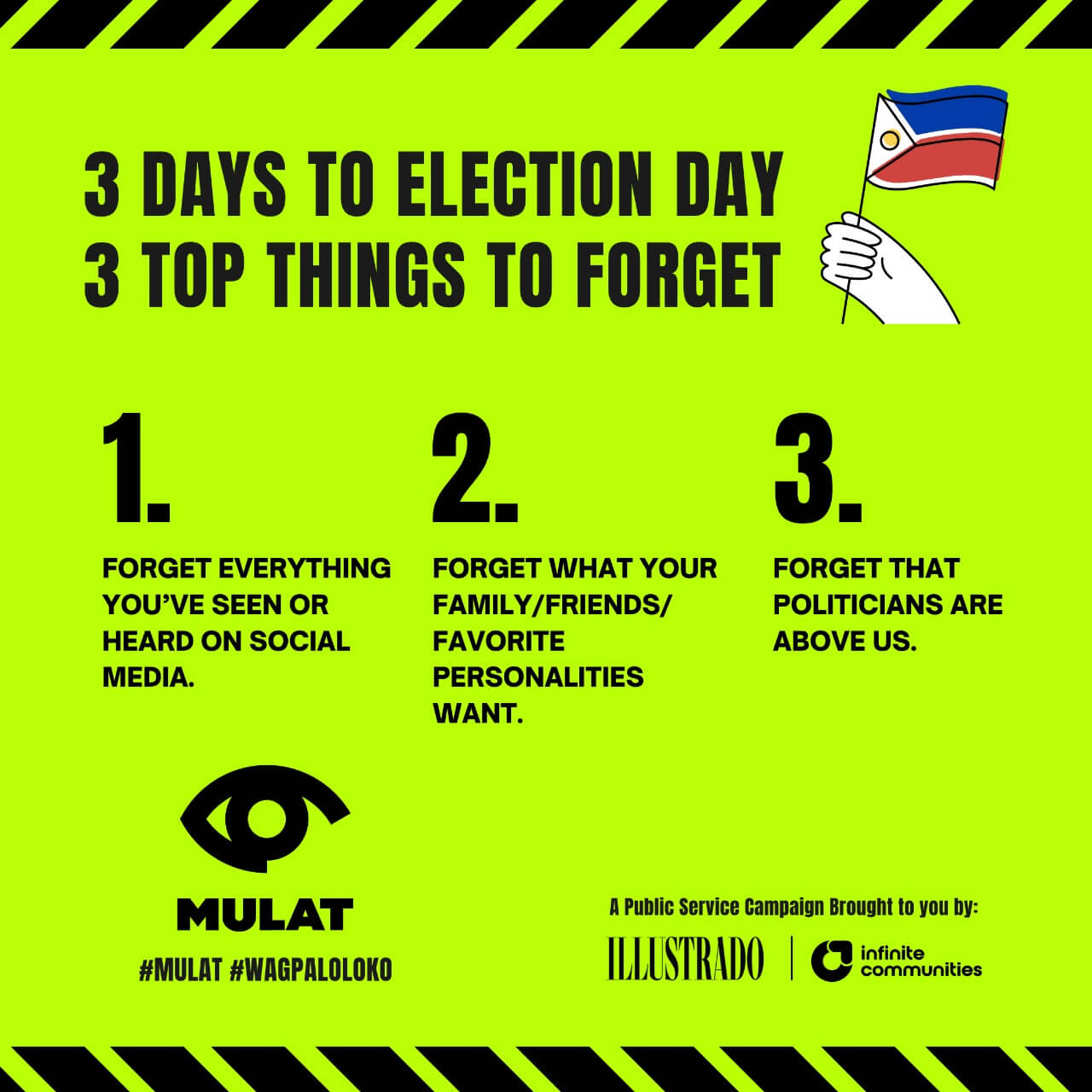 As voting nears the end, Filipinos across the world await election results in anticipation. With 3 days left until election day, here are 3 things Filipinos can forget to move forward together as a united people:

Forget everything you’ve seen or heard on social media.

Social media is not always a credible source of information.

Filipinos are among the most active social media users in the world, and platforms like Facebook can be conduits for skewed and false information.

Do your own final research online. It takes seconds to search and a few minutes to read. Start by typing ‘why you should vote for (candidate name)’ and read the top 5-10 articles that appear. On top of those articles, Google will also present to you what others have searched for.

Know that you are not the only one looking for the truth.

Maintaining an open mind is also crucial during the country-wide height of emotional thinking, and it will be hard to convince people to step out of a biased mindset.

Chances are, after doing this brief exercise, you would have formed a more balanced opinion.

This balanced opinion is your right. Act on it.

The often-negative connotation of crowd mentality is most prevalent among Filipinos during these times, and you may often find others attempting to sway you towards their way of thinking.

Forget what they want. Ask yourself first, what do you really want for your country?

Who you support should come down to the vision you have for your country. Start with the simplest want (e.g. I want a government that will not steal from taxpayers) and support those who are most aligned with your goals.

Mass media and celebrity culture has made politicians appear ‘better than us’ simply because they look and sound better. We know they are not, but why is it that we make most of them feel that they are?

Don’t forget that we, as voters, are responsible for putting them in power too.

Let’s remind ourselves that our purpose in the world is to serve, to try and make everything better than when we first found it. Our elected officials have one job only, and that is to serve their mandate faithfully. Every single one of them.

And if your candidate has no proven track record of honest public service, forget them. Now that’s 4.

“It was horrible!” he says. “It was hours and hours of thirst and hunger as I queued in to meet up the judges, along with those thousand hopefuls, only to be crushed at the end of the day.” Filipino host in the hit noontime show Eat Bulaga Indonesia shares his story in Illustrado’s Angas Pinas by Excel Dyquianco.

True greenie Lasalista, and longtime Filipino-community supporter participating in both initiatives for charity and camaraderie, Ishwar was born and raised in Bacolod, educated in Manila, speaks English like Manileňo, and Ilonggo like a Bacolod-native. Plain speaking, Ishwar is one of us.

Dating In China and tiawan