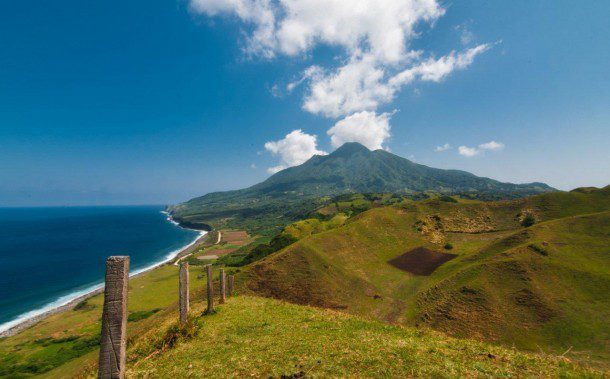 Batanes is definitely is a passionate fill of nature, the rockies, history and culture. While now a favorite location for movie and commercial shoots, Batanes remains pristine and untouched, luring many tourists with is antique charm. Excel Dyquiangco satisfies his wanderlust by exploring the island of Batanes up close.

It now seems so long ago when the whole island of Batanes was battered by strong winds, waves and rains and most tourists opted to travel elsewhere and stay within their comfort zones. It has been said that people get stranded up here during heavy downpours. But now with the portrayal of the local film industry and the media via the 90s hit film Hihintayin Kita Sa Langit, the Iza Calzado starrer Batanes, and a popular coffee commercial on TV, one wouldn’t even care if his schedule gets derailed. As the mystery behind the Ivatans, the stone-bricked houses, and the Batanes local delicacies unravel, more and more people are willing to explore the genuine gems and goldstones of this mystical place up north.

Located at the northernmost region of the country, Batanes is also known as “Home of the Winds” for obvious reasons. The province is composed of 11 islands, three of which are inhabited (Itbayat, the largest, followed by Batan and Sabtang). Unlike the rest of the country, Batanes enjoys four seasons: fall from September to November, winter from December to February, spring from March to May and summer from June to August. The climate is colder than the rest of the country as the province  is surrounded  by major seas all around – Bashi Channel to the north, Balintang Channel to the South, Pacific Ocean to the east and South China Sea to the west.

The Hills Are Alive

The picturesque Batan Island looks like it came right out of “The Sound of Music.” Gentle rolling fields bound by green pastures provide the best view of Rakuh a Payaman (which means “big pasture”). In these parts, cows and goats graze at the steeper mountain slopes, while a few trees provide shade and from the distance come the sight of waves crashing across the shore.

The road to the Rolling Hills is lush with acres of mountains and of green velvet grass; and beyond that is the view of Itbayat Island. As its name suggests, anyone who slips while walking down the narrow pathway gets to “roll” down the hill–a good several meters down.

The Chawa View Deck provides an enthralling glimpse of the Batanes mountainside with a steep line of stairs that bring you closer to the seas. Those who have been to Alapad Road remember the scene in which Dawn Zulueta and Richard Gomez were frolicking in “heaven” in Hihintayin Kita sa Langit, one of the very first local movies that paid tribute to the mystic Batanes landscape. It was a scene which featured a narrow road on top of a small cliff, and beyond that, a view of the blue crystal seas.

The lighthouse at Naisdi Hills and the Vulugan Boulder Beach, both found at the northern part of Batan, are not to be missed. The operational lighthouse gives guests a view of the stretch of the Pacific Ocean and comes alive in the night guiding fishermen to shore. The lighthouse is also ideal for romantic dinners.

The boulders that line the Vulugan Boulder Beach are andesite rocks spewed by Mount Iraya, an active volcano in Batanes. These rocks were smoothed over time by the Pacific Ocean.

Getting to Sabtang Island, which was chosen by the Department of Tourism as one of the 22 best destinations in the country – with a fallowa (a banca without outriggers) ride from the San Vicente port. The journey is not exactly calm as the waves and winds are very fierce, but after thirty to forty-five minutes of a bumpy trip, the municipal hall of Sabtang Island comes to view. The smallest island in Batanes is best known for the stone-brick walled houses. The town of Chavayan, a UNESCO World Heritage nominated site for its preserved houses made of lime and stone that have withstood the strongest of storms. Unlike traditional houses, each section of the house is distinctly separate from the others and they have thick cogon-thatched roofs which take months to make.

The Nakabuang Beach and Arch, also known as the “White Beach,” is famous for its natural rock arc formation. This is a perfect spot to enjoy the clear waters and lounge in the white sands. Ideal for swimming, snorkeling and picnicking, this beach promises nature at its finest.

Interestingly, Sabtang Island is also the home to the oldest person in the whole of Batanes, a 104-year old man who is still sharp. You can find him threading his fishing nets – without eyeglasses. He claims that his secret to a golden life is avoiding eating pork and meat. He only likes kamote and vegetables. 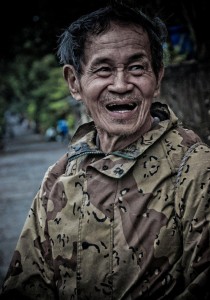 Aside from being known for the vacul headdress which Ivatan women wear to shield themselves from the sun and rain and the tadidi, a traditional vest made from dried banana leaves which the men wear, Batanes’ pride is its people. As you explore downtown Batan, you will be greeted by warm smiles all around. You may experience this more if you are Ilocano as there are many Ilocanos on  the island, and you have  a common language to bind you. A testament to how jovial and respectful the people are is the “Honesty Coffee Shop” at Ivana, where there is only one rule: you pay for what you buy without anyone assisting you.

Ivatans are also known to be trustworthy and peace-loving people. The province has a zero crime rate which proves that the people cooperate and obediently comply with local laws. Even loitering is a major crime and in almost every corner, there are separate trash bags to segregate paper and plastic.

With Batanes being such a relatively peaceful community and its spots so magical, no wonder this is a must-visit for guests and tourists who understandably would not mind being stranded in this magical place for a day…or more.

Things to consider when planning a trip to Batanes:

Flight Reservations: Only Seair travels to Batanes – once or twice a day. To get the best deals, look out for promotions in their website at http://www.flyseair.com/. Take advantage of last minute deals and your fare of PHP15,000 per person might just be cut in half.

Places to Stay: If you want to experience a modest house with all the amenities you need, including wifi and cable TV, try Novita House in downtown Batan – cost is PHP1,700 per day with an additional of PHP170 in excess of six people. The most expensive room is priced at PHP15,000 a night.

Where to Eat: For breakfast, go to St. Dominic’s College canteen. They offer hotdogs, hams and eggs. If you are a pizza lover, try Casa Napoli. Also, Hiro’s Café and Pension Ivatan. Insider tip – preorder first, rather than drop by unexpectedly. They don’t have guests coming in every meal and pre-ordering ensures that the food they will cook is going to be eaten.

Best Time to Go: Off peak seasons are from June to January. Accommodations are reduced during this time as well. But be forewarned that rains come at this time and you might get stranded on the islands. However, rains can also come during the peak seasons.

Must Brings: Jacket or sweatshirt! Batanes gets windy even when it’s high noon. Bring sneakers for trekking. You can also bring your swimsuit if you want to take a dip in the water. Just below Fundacion Pacita is a low tide beach – water is cool and warm.

Pasalubongs: Some shops sell the Batanes vakul headdress or tadidi jacket for men. You can even buy wallets or other souvenirs made of rattan.

Palawan is one of the Philippines most popular summer destinations. As well as being stunningly beautiful, Palawan is a destination engulfed in rich cultural history. Learn more about this getaway destination here. #illustradomagazine #taasnoofilipino

A Remarkably Relaxing Travel to Cape Town and the Winelands

Travel to Cape Town and the Winelands: Table Mountain is the symbol of Cape Town which rises over a thousand meters from the coastal plain; it dominates the whole city like an omnipresent giant.

#taasnoofilipino Skipping past the typical hotel and booking an Airbnb is the best way to experience local life! Check these total IG-worthy spaces from around the world, that will surely make your trip a whole lot more special. #illustradomagazine

Filipino in Australia: My Pinoy Life in Adelaide City

Adelaide is located in the state of South Australia with a land base of around about 100,000 sq kilometres, with a population of roughly 2 million. First time visitors think of Adelaide as a fairly quiet and provincial setting with all the amenities of a metropolis.

Balingkinita–NOT: The Plump AND Proud Pinay

Hi Lyndly!
The contest is on our Facebook page 🙂