Until recently, the connection between Filipino and Arab culture has long been overlooked. With the narrative often overshadowed by racial stigma and prejudice, many become surprised when finding out that the two cultures are in fact connected through deep, intertwined roots. Bridging the gap between the two cultures, Dubai-based cultural worker and Ateneo Student Eldrick Yuji Los Banos highlights the similarities through Katúlad/Kahádha, an online art exhibit that celebrates and connects modern Filipino and Arab art.

Tell us about the exhibition

Katúlad/Kahádha (@ktldkhda on Instagram) is an online exhibition that takes the works of the Ateneo Art Gallery (PH) Barjeel Art Foundation (UAE), and showcases modern paintings and collages from the Philippines and Arab countries, exploring their similarities and cultural and historical nuances. In that sense, it’s also a tool that promotes awareness cultural diplomacy between the two regions. 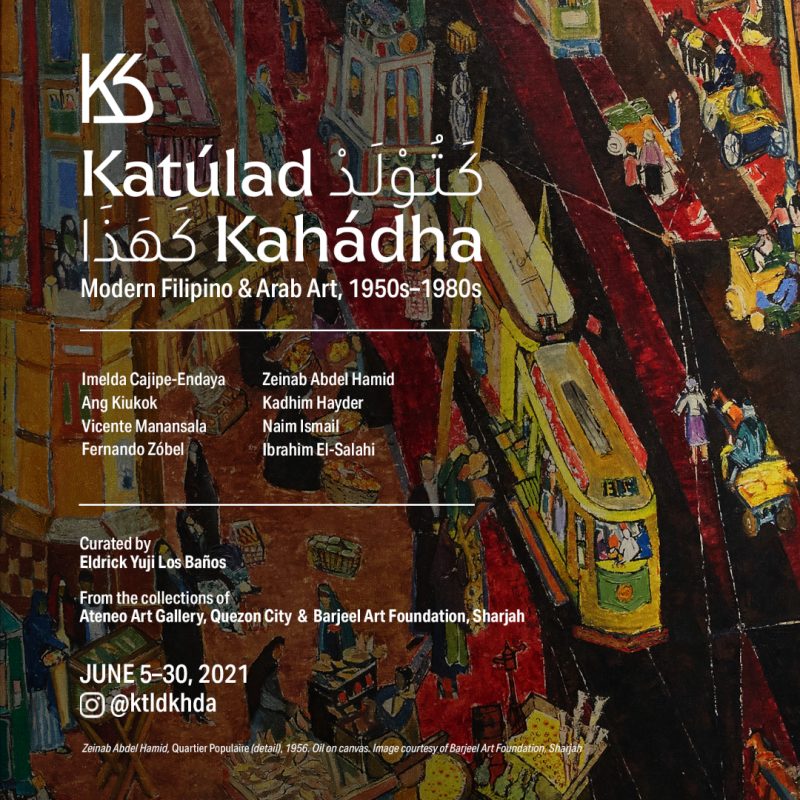 Along the way, it explores Sudanese Sufi tradition, Egyptian feminism, the Palestinian struggle against Israeli occupation, Jeepney art and the history of denim in the Philippines. I aim to portray the Philippines and the Arab world on equal terms, elevating their relationship beyond the ‘OFW’ outlook by using art as a common language and denominator. We’re both people with the power to create beautiful things.

What’s the meaning behind the name?

“Katulad” is Filipino for “similar” while “kahadha” is the transcribed Arabic word for “such” or “like this.” Both words, which share an initial “ka” syllable, convey a sense of similarity—the main theme of the exhibition.

What inspired you to choose this topic? Growing up as a Filipino in the Middle East, you’ve caught a glimpse of both worlds.

Over the years, I’ve put together artworks from different times and places as a hobby based on parallels in shape, style, and concept. When I moved back to Dubai in late 2020, I learned more about the art of the Arab world as an Art Management major. As I did, my instinct for parallels kicked in and I was mentally matching the works I saw in local art spaces to ones I had seen back in the Philippines.

As a Middle East diaspora kid, I was always trying to find pieces of the Philippines in the Arab world. For example, both cultures relate through language. “Salamat” is etymologically related to the Arabic “salaam” or peace.

What are the similarities between Filipino and Arab art? In both historical and technical aspects. How are the cultures interconnected through history?

My exhibition focuses on modern art in both regions, which developed from art movements that originated in Europe and the United States in the twentieth century. The artists I selected for Katúlad/Kahádha (except for Imelda Cajipe-Endaya) received art training in the West and brought back new styles and techniques, transforming the movement into what we now know as modern Filipino and Arab art.

Traditionally, representations of human beings and animals were forbidden in Islamic religious art, leading to the development of abstract art in the Muslim world centuries before the west. You can see that in the carved okkir patterns of Muslim Mindanao, featuring flowing plant-like curves that mirror the arabesque decorations we see everywhere in Islamic art.

The artists featured here have witnessed prominent events and have crossed paths one way or another. Do elaborate more on their stories.

As I looked into the backgrounds of these artists, I was struck at how similar their sociopolitical contexts were: Ang Kiukok and Iraq’s Kadhim Hayder, both were painting during a time of martial law and anti-communist repression in their respective countries. Similarly, Vicente Manansala and Zeinab Abdel Hamid were both active in the years following their countries’ independence from Western powers.

Even more impressive were the points of contact in their personal histories. El-Salahi, Kiukok and Manansala were all in New York in 1965. Who knows if they ran into each other? The uncanniest of these coincidences, though, is the way in which Zóbel and El-Salahi began their journey as artists: as young men, both artists intended to study medicine, with Zóbel enrolling at the University of Santo Tomas in the early 1940s, when they each began to suffer from ill health, foiling their plans. As a result, Zóbel and El-Salahi picked up art, and the rest is history.

Filipino history within the Middle East is a big part of this project. Can you give us a brief overview on their presence/influence in this region?

The first wave of overseas Filipinos arrived in the 1970s: engineers and workers who were hired in the oil-rich countries of the Arabian Gulf. Dictator Ferdinand Marcos then created the labor export program as a temporary solution to high unemployment in the Philippines, paving the way for the global migration patterns we see today. Women followed to the Middle East from the 1980s onward to work in the service sector and as domestic helpers.

The engineers and construction workers of the 1970s wouldn’t have been the first Filipinos ever to set foot in the Arab world, though. The opening of Egypt’s Suez Canal cut down travel time between Spain and the Philippines, allowing the sons of the Filipino elite to study in Europe. On their way there, these ilustrados would have stopped over in the Middle East. Jose Rizal, for instance, recorded his impressions of Aden in Yemen and Port Said in Egypt in his journal on his first trip to Spain.

This project aims to break down stereotypes towards Filipinos and bridge the disparity between two seemingly distinct cultures. Can you tell us more about this?

In Dubai, Filipinos are everywhere: I often joke that you can’t tell the difference between a TGI Fridays here and a TGI Fridays in Makati because both their staffs are Filipino. A lot of us are in the service sector, but in the international schools I attended, I never had Filipino teachers, and I hardly saw Filipino executives calling the shots in big business. When I got into the local arts scene, I was often the only Filipino present.

If people in the Middle East only see Filipinos as third class citizens, what kind of outlook will they have on Filipinos as a whole? If Filipinos are absent from positions of excellence in education, management and the arts, does that mean we lack the skill? I was once told by a British education officer that my English was “a miracle.”

Filipinos are a creative people. Yes, we’re known for being good singers, but the lack of Filipino artists in the region understates the rich talent and perspectives we have to offer. By pointing out the similarities in the modern art of the two worlds, I wanted to level the playing field. If we look into the histories of the Philippines and the Arab world, we find incredible artistic and cultural achievements that rival even the west.

Lastly, what’s your wish for Filipinos moving forward? What can they do to change the narrative?

Consume and make more Filipino art — books, films, music, plays, visual art! We must take our image into our own hands. When I moved back to the Philippines four years ago, I was astounded by the wealth of art of every kind being made around me in Metro Manila.

We owe our artists our attention and financial support. The art is there, we just need to open our eyes.

Let’s not forget, though, that art is also political. In fact, many of the modern works in the Ateneo Art Gallery collection are politically charged.

As we seek to change the way we are seen abroad through artistic expression, we should also use our voices to draw attention to the current social and political situation in the Philippines. We in the diaspora tend to romanticize Filipino culture and its symbols, forgetting the people behind it all and their experiences.

I tried to do that in the exhibition by drawing an association between Manansala’s depiction of jeepneys in the 1950s and the fate of jeepney drivers and operators today in the face of Duterte’s jeepney modernization program which they cannot afford. As we Filipinos move forward, may we never forget the country we have left behind. 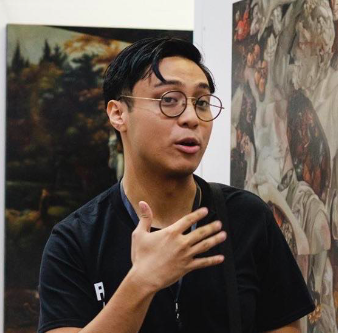 Eldrick Yuji Los Baños is a Dubai-based cultural worker finishing his BFA in Art Management at the Ateneo de Manila University. He has worked in arts administration and research for Pineapple Lab, Tanghalang Pilipino, Ateneo Art Gallery and UP Vargas Museum. He has also been involved as an actor and assistant director for Tanghalang Ateneo, Ateneo Blue Repertory and Dubai Drama Group. Born in the Philippines and raised in the UAE, his research interests include global art histories and the Filipino diaspora of which he is part. Follow him on Instagram at @eldrickyujir.