“So what else shall we see in Utah aside from the Mormons?” asked the son as I spread the road atlas on the hood of the Durango in front of the Caesar’s Palace parking lot in Vegas.  “A lot”, I said as I plotted our route on the map. “The parks there will knock your socks off!” But somehow, he seemed unconvinced.

And so we drove straight to Zion National Park 280 kms. away through an undulating landscape of bare Nevada desert that skirted a corner of Arizona as well. But what was supposed to be an easy 3-hour drive turned into a 6-hour ordeal for it started to rain so hard as we ascended the mountain passes. This turned into sleet which then became a heavy snowfall that slowed us down to a crawl. Nonetheless, the stark beauty of the mountainous landscape blanketed in white became a great subject for photography even if we arrived at our hotel dead tired and shivering with cold due to the unexpected wintry conditions!

Early next morning, the sky was clear and sunlight filtered through the mountains that towered over  the landscape just behind our bedroom.  We loaded up and headed for the park entrance 25 kilometers away paying the requisite $10 entry fee for the car. It was the most beautiful and breathtaking drive I’ve ever done where every curve seemed to open up a new vista that was better than the last. The scenic route which had many tight switchbacks  was surrounded by sky-high towering cliffs, multicolored sandstone rock formations and 3,000-foot high canyon walls. Contrasting against these were deep-green pine trees, cottonwood groves and moss-filled crevices. Every now and then we had to stop to take pictures and breathe in the air that was so fresh it made the entire experience quite heavenly. No wonder when the Mormons discovered this place, they called it Zion – meaning “place of refuge”. 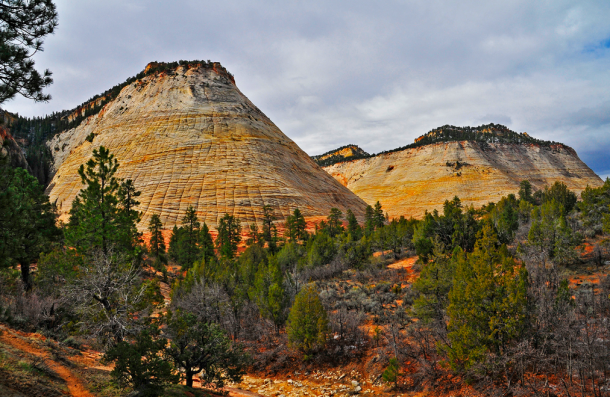 We parked at the Visitor’s Center and took the shuttle bus that traverses the park’s many geological wonders with names like the Grotto, Weeping Rock, The Great White Throne, the Sentinel and the Temple of Sinawava. You can get down at any of these places and take a hike among numerous trails that branch out in several directions with varying lengths and degrees of difficulty.

Hiking through the 2 km. long Lower Emerald Pool trail was a moderate exercise which started from the Virgin River and meandered upwards for several meters before leveling off through a dirt path with medium drop-offs. It closely followed the twists and turns of the river before veering off to a higher elevation where the towering cliffs of the rock formations enveloped the landscape. There were several lookout points that enabled you to stop, rest and admire the stunning scenery.  Then it opened up to a wide vista that had a waterfall cascading down to a pool below which you passed via an overhang that was naturally carved from rock. Then the trail looped back to where we started and we saw a lot of deer munching through the thick foliage.

Another easy walk was the Narrows which had a paved trail. What made it interesting was the sheer rock face of the canyon that rose on both sides squeezing you in till there was nothing much to see but the river below and the sky above. It is supposed to be a long hike which requires you to wade through water but we turned back at the point where we had to remove our shoes since there was no longer any dry land! Heading back to the parking area, we had the wind whistling in front of us through the narrow space which made the squirrels scamper for what looked like acorns that were rolling and tumbling along the way blown by the sudden gusts. 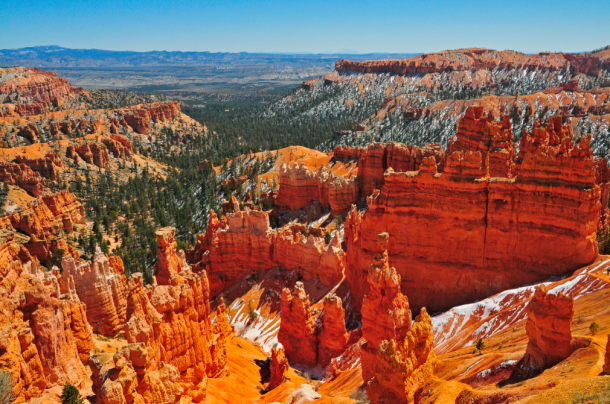 Having spent a whole tiring day outdoors, it was a great relief to be back in the cozy hotel for a hearty dinner  of the local buffalo ribs and huge loaves of bread. Topped with beer in the balcony while watching the pale moon rising from the top of the mountain peaks, it was a superb repast.

Bryce Canyon was our next destination and it was a 137 km. drive where, once more, the freakish weather brought a fierce storm that dumped a lot of snow on the road that had us shivering and running straight to the lobby fireplace when we checked-in at the Best Western for the night. Miraculously in the morning, we had fine weather when we headed for the park.

There is no place quite like Bryce where the landscape looks otherworldly. You could say it is a natural amphitheater that nature carved from the edge of a plateau whose colorful erosions called “hoodoos” look like sentinels standing in another planetary landscape. Millions of years ago, this part of what is now southern Utah was an inland sea. The sediments deposited at the bottom were exposed when the sea dried up leaving them to be sculpted by ancient rivers and freeze-and-dry weather that cracked the rocks leaving behind these strange and grotesque formations which are also picturesque as well. Until now the process is still going on and one day, they will all disappear. 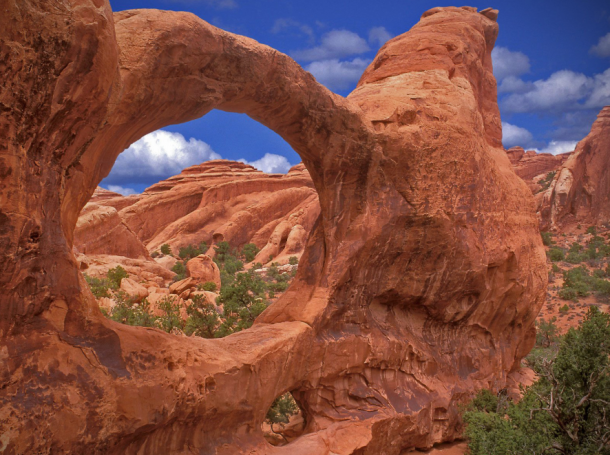 Meanwhile, it is for us to enjoy as a world wonder – this plateau which has a length of 32 km. and contains several of these amphitheaters of which Bryce is the largest at 19kms. long by 5 kms. wide. Compared to Zion where you have to look up, here in Bryce you have to look down to marvel at the view. There are many trails that will take you down to the floor of the hoodoos which is about 250 meters deep but we chose to just walk along the rim for several kilometers. The color and hue of these rocks varies from red to white to vermilion and their shapes gave rise to different descriptions such as castles and cathedrals as well as monks in robes, steeples, spires and even prison walls.

You can let your imagination run wild and as we sat to rest along the lookout points, we understood how easy it was for the ancient Indians to weave imaginative stories and legends about the place. It is also a photographer’s delight because as the day progresses, the light changes and the play of light and shadow gives depth in varying degrees to different areas of this wonderful landscape.

We went to Salt Lake City for a couple of days and enjoyed the Mormon hospitality with its share of culture and history  including the beautiful mall there before heading south to Arches National Park. Set in the high desert , it is a geological wonderland with the highest concentration of sandstone arches in the world. Erosion had once more played a major role and sculpted thousands of formations giving rise to delicate arches along with colossal sandstone fins, massive balanced rocks and spires all hanging on sheer rock cliffs in a setting that looks primeval with its yellowish/reddish color. 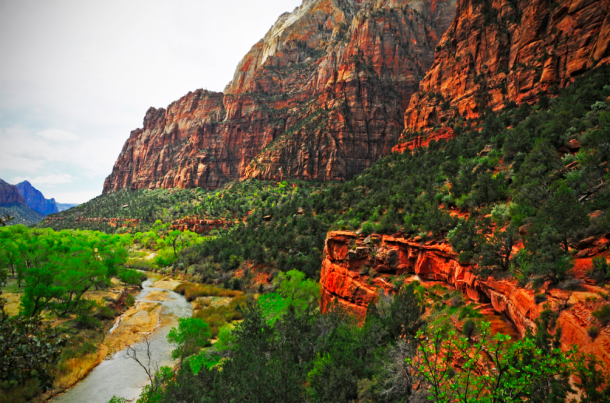 There are many things one can do there besides admiring the landscape. Aside from hitting various trailheads and the usual rock climbing, you can also do ziplining, horseback riding and and canyoneering then go on Hummer safaris, hot air balloon rides and biking. Not content with that, you can also go paddleboarding and river rafting in the waterways that meander around the 76,000 acres. But for lack of time, we just drove around the park, stopping at designated spots where one can drink in the astounding views.

Our last stop near the border of Arizona was the Navajo Nation Indian Reservation, a sprawling 27,000 square kilometers of semi-autonomous Indian-governed territory. Here, one can visit authentic Indian villages as well as ancient ruins and understand different cultures that are native American before the coming of the White Man. Aside from that, you can also visit Monument Valley which is what we came for actually located in the middle of the reservation and easily accessible from Highway 163.

A rough, though highly-scenic 17-mile dirt road loops around the major sights starting from the Visitor Center and takes you past eroded buttes and rock spires with descriptive names like Totem Pole, the Mittens and Elephant Butte. They are some of nature’s awe-inspiring monuments standing in the middle of a flat-bottomed valley that have transfixed artists and visitors including a whole set of Hollywood film-makers. John Wayne and director John Ford put this place on the map with classic Western movies like “Stagecoach” and “Fort Apache” all being shot on location here.

As we drove south heading for the Arizona border late in the afternoon under the glare of the setting sun, I turned to the son who was doing the navigation for me and asked, “So how did you find Utah?” He smiled and replied, “Superb!” Well, I couldn’t agree more.