In recent years, the UAE’s burgeoning scene for artistic expression – lead by the nation’s dancers, musician, and poets – has become more widely embraced. While rapping is a relatively new addition to the landscape, some Filipinos have taken to the scene and made their presence felt. These forerunners include veterans from the homeland and a new breed of homegrown rappers at the epicenter of Dubai’s emerging hip-hop core.

As one of the pioneering rappers of the Filipino hip hop scene both in the Philippines and the Middle East, Vin Albert Martinez AKA MC Twisted has powered through many obstacles to bolster the representation of Dubai’s underground Filipino rappers. He has brought the community together and organized a number events including Bar4Battle, known as a stomping ground for Pinoy rappers and the first OFW battle league. Promoting the value of succeeding together as a united fraternity, Twisted promotes and upholds the spirit of collaboration founded on a code of respect. “As Filipinos, we need to stop hating. Remove the crab mentality and start appreciating. Help others as much as you can, learn to obey, follow, and support the community.”

Along with other heads of the rap community, Anthony “Makavely” Noche has continually provided support and a platform for Filipino rappers, producing some songs and music videos that have featured fellow artists. Storytelling is a crucial aspect of Makavely’s music, with his family back home being the driving force for his lyrics. Realizing that all OFW’s have a voice to be heard, he turned his bedroom studio into a production center in support of the rising Pinoy rap talents of Dubai. With songs like ‘Saludo’ and ‘Elena’ he paints the story of the OFW in a new and profound light; speaking of conquering adversities and the joys of life away from the Philippines.

Transitioning from his hip hop roots in Batangas to Dubai’s multicultural playground, Patrik Garcia aka Phat G has managed to carve out a unique presence and following in Dubai’s Filipino hip hop underground. He has released a number of EP’s featuring pieces which talk about his Dubai hustle.  He also established the “Lipad ng Malaya” vlog platform, where he supports a growing number of artists. As a musician, Phat G has set a new bar for aspirants by combining his eye-opening lyrics with his talents as a videographer.  Sharing his insights from the indie scene, he says, “I want my fellow kabayans to become more aware that success and prosperity are self-made and there’s a genius in every human being that we just need to unlock.” 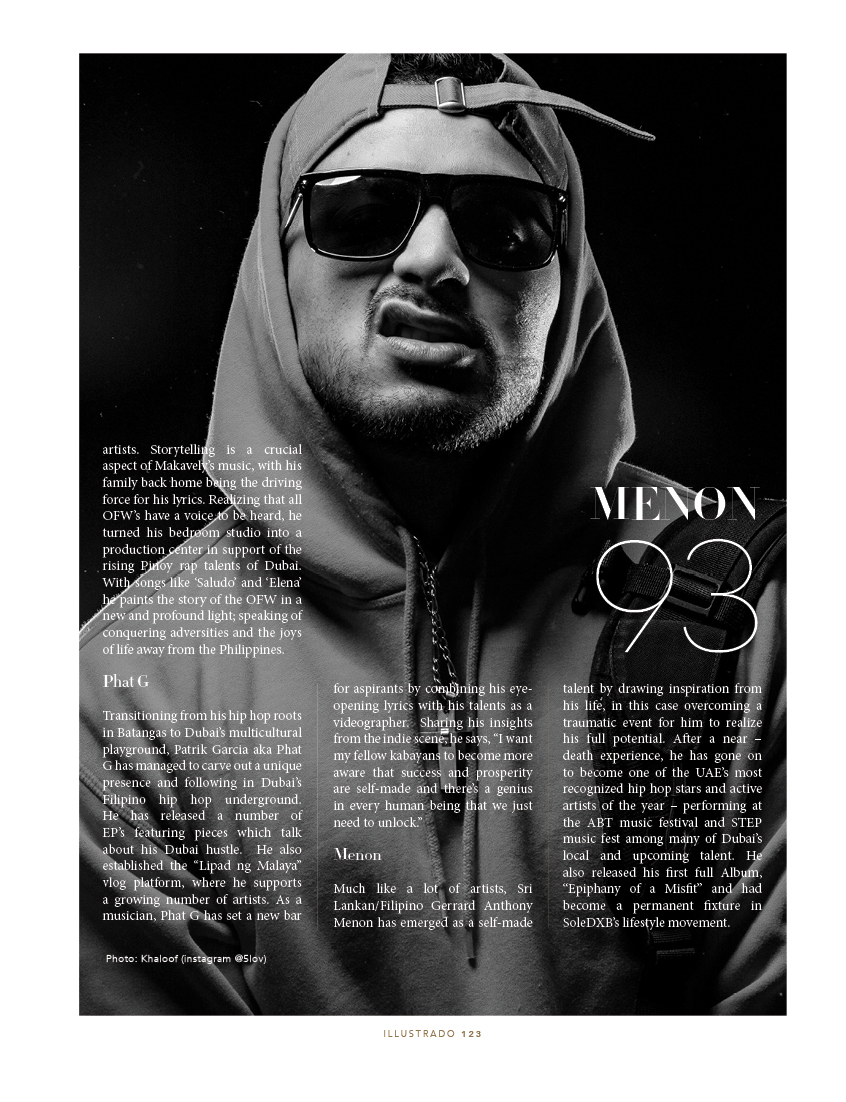 Much like a lot of artists, Sri Lankan/Filipino Gerrard Anthony Menon has emerged as a self-made talent by drawing inspiration from his life, in this case overcoming a traumatic event for him to realize his full potential. After a near – death experience, he has gone on to become one of the UAE’s most recognized hip hop stars and active artists of the year – performing at the ABT music festival and STEP music fest among many of Dubai’s local and upcoming talent. He also released his first full Album, “Epiphany of a Misfit” and had become a permanent fixture in SoleDXB’s lifestyle movement.