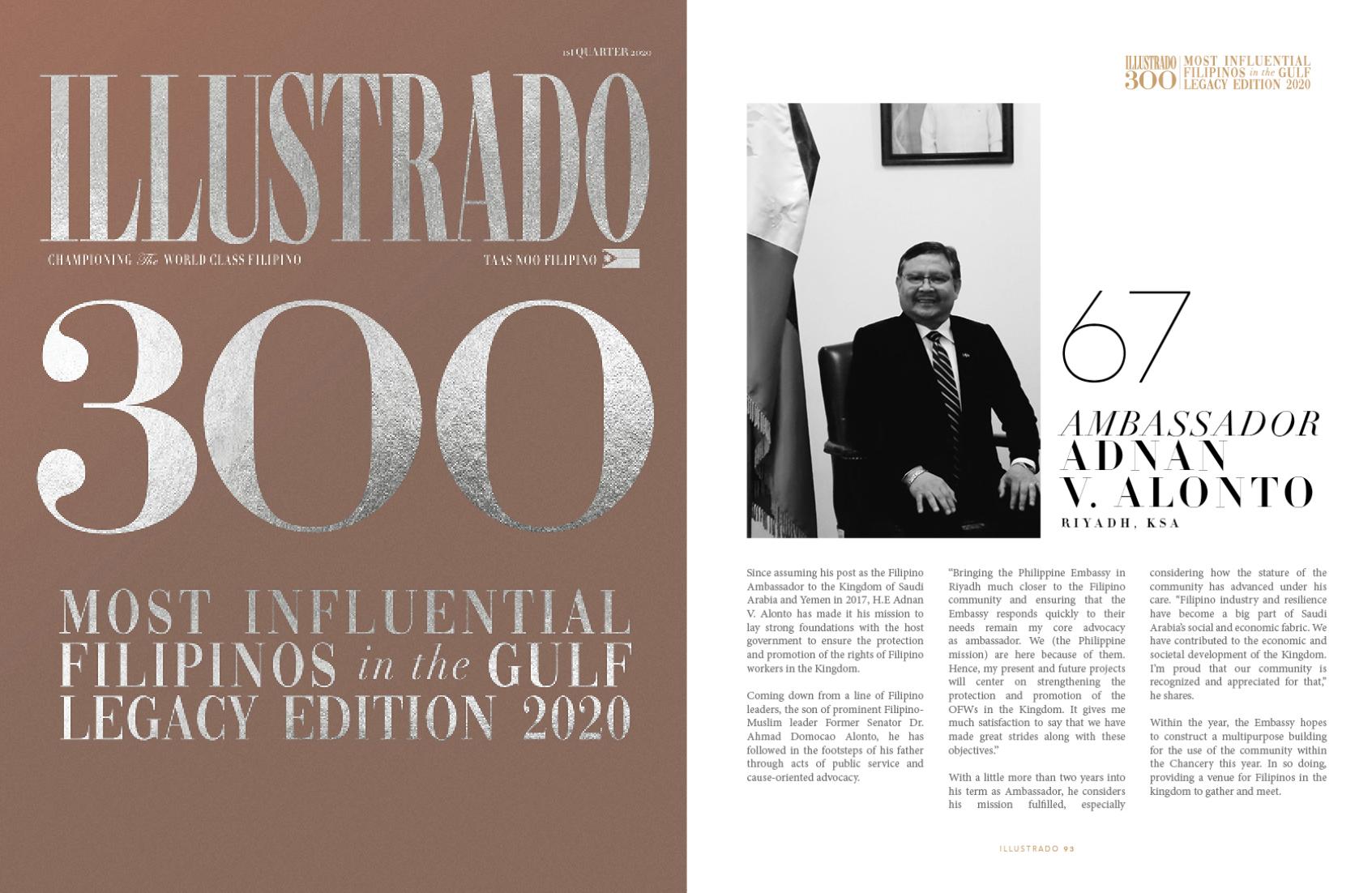 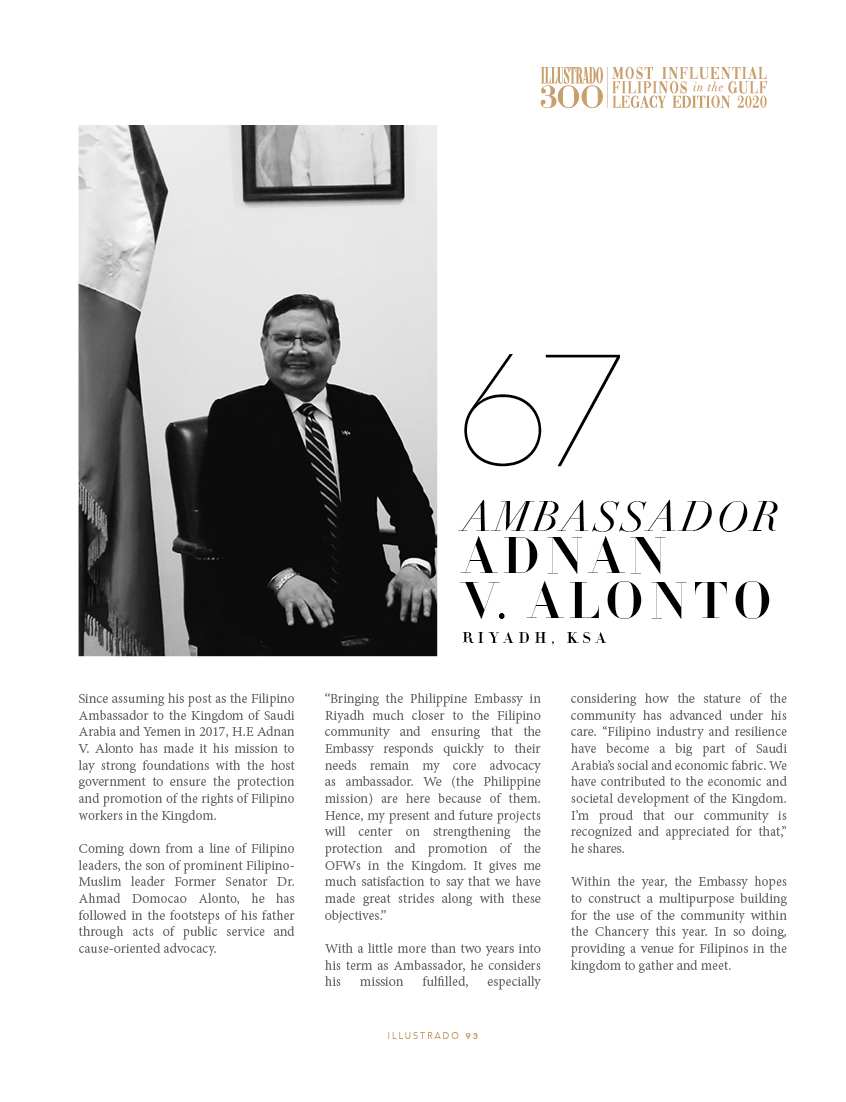 Since assuming his post as the Filipino Ambassador to the Kingdom of Saudi Arabia and Yemen in 2017, H.E Adnan V. Alonto has made it his mission to lay strong foundations with the host government to ensure the protection and promotion of the rights of Filipino workers in the Kingdom.

Coming down from a line of Filipino leaders, the son of prominent Filipino-Muslim leader Former Senator Dr. Ahmad Domocao Alonto, he has followed in the footsteps of his father through acts of public service and cause-oriented advocacy.

“Bringing the Philippine Embassy in Riyadh much closer to the Filipino community and ensuring that the Embassy responds quickly to their needs remain my core advocacy as ambassador. We (the Philippine mission) are here because of them. Hence, my present and future projects will center on strengthening the protection and promotion of the OFWs in the Kingdom. It gives me much satisfaction to say that we have made great strides along with these objectives.”

With a little more than two years into his term as Ambassador, he considers his mission fulfilled, especially considering how the stature of the community has advanced under his care. “Filipino industry and resilience have become a big part of Saudi Arabia’s social and economic fabric. We have contributed to the economic and societal development of the Kingdom. I’m proud that our community is recognized and appreciated for that,” he shares.

Within the year, the Embassy hopes to construct a multipurpose building for the use of the community within the Chancery this year. In so doing, providing a venue for Filipinos in the kingdom to gather and meet.

It’s What I Do: Kareen Javen-Vanguardia

From her humble beginnings back home to Dubai, architect Kareen Javen – Vanguardia shares her success story through her inspiring journey. #Illustradomagazine #taasnofilipino

Louis Eguaras: A Pinoy Chef’s Journey to the White House

He worked his way to the White House kitchen and served many a famous palates like that of Former President George Bush, Sr., First Lady Barbara Bush, Former President Bill Clinton, Armold Schwarzenegger, Bruce Willis, Demi Moore, and Nelson Mandela just to name a few. He now shares with Illustrado the culinary journey that took him from cooking spaghetti in his Mom’s kitchen in Alabang to preparing gourmet dishes for dignitaries in the US capital.

International Filipino bloggers show off their fresh and colorful style, fit for this steamy summer season.

In The Classroom Called Life

Education has a deeper and more profound purpose than just to earn a living. It is that which will help you towards realizing yourself and your dreams – hopefully guiding you to your place in the world.

Roman Guevara – Illustrado 300 Most Influential Filipinos in the Gulf 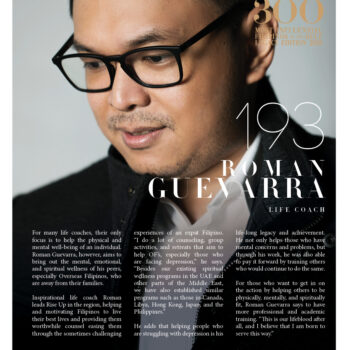 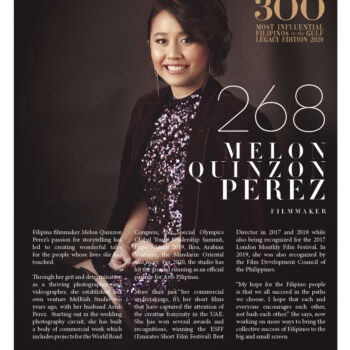 Melon Quinzon Perez – Illustrado 300 Most Influential Filipinos in the Gulf