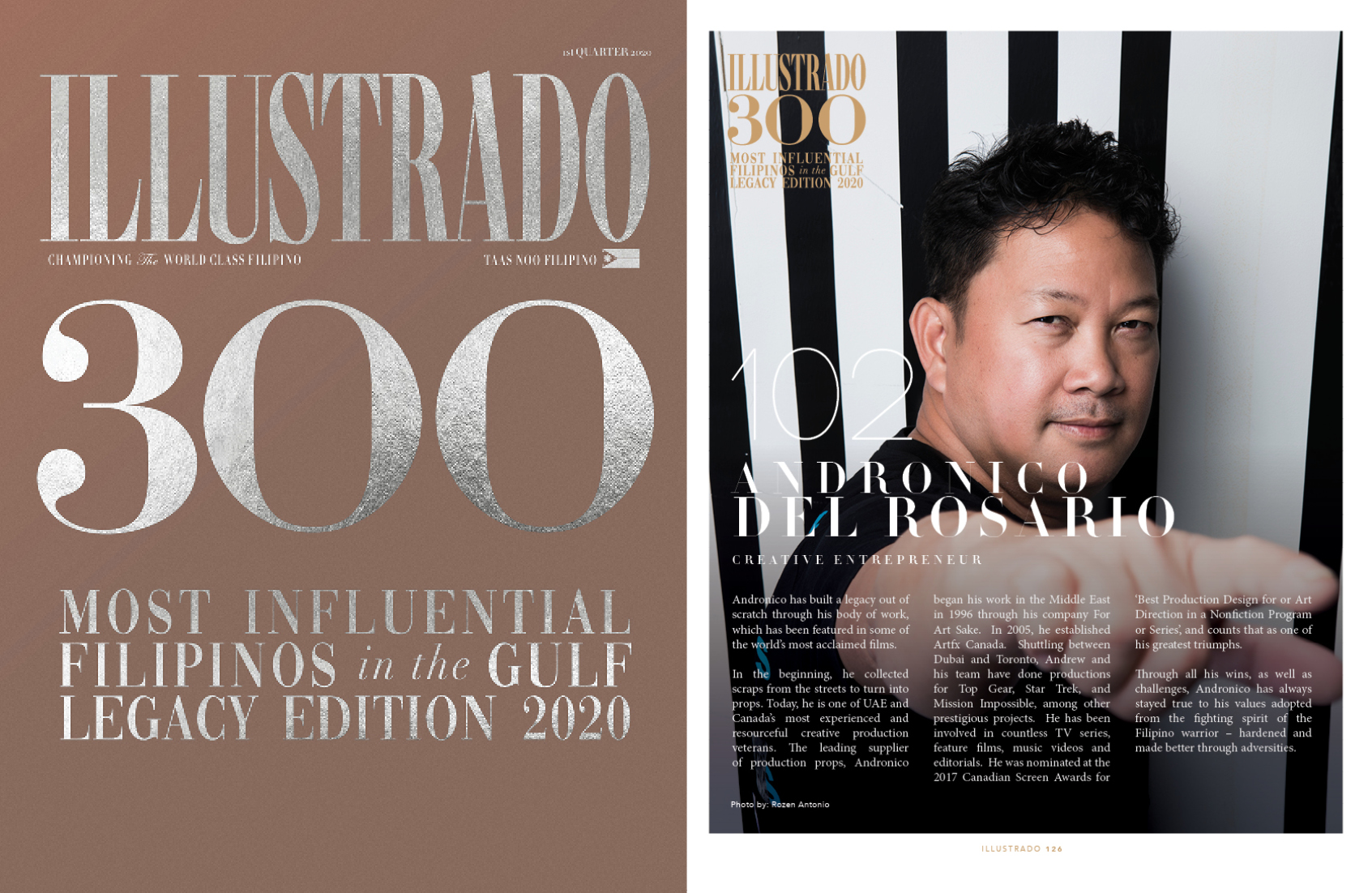 Andronico has built a legacy out of scratch through his body of work, which has been featured in some of the world’s most acclaimed films.

In the beginning, he collected scraps from the streets to turn into props. Today, he is one of UAE and Canada’s most experienced and resourceful creative production veterans. The leading supplier of production props, Andronico began his work in the Middle East in 1996 through his company For Art Sake.  In 2005, he established Artfx Canada.  Shuttling between Dubai and Toronto, Andrew and his team have done productions for Top Gear, Star Trek, and Mission Impossible, among other prestigious projects.  He has been involved in countless TV series, feature films, music videos and editorials.  He was nominated at the 2017 Canadian Screen Awards for ‘Best Production Design for or Art Direction in a Nonfiction Program or Series’, and counts that as one of his greatest triumphs.

Through all his wins, as well as challenges, Andronico has always stayed true to his values adopted from the fighting spirit of the Filipino warrior – hardened and made better through adversities.

Top Gear, Star Trek, Mission Impossible. These are just a few of the projects master production designer, art director and artist Andronico Del Rosario Jr. has to his credit.  Starting as a props man in Dubai Andronico is the veritable self-made man. With no capital to his name, a resourceful artist who used to pick scraps from the road to turn into props, he has evolved into one of Dubai’s most gutsy production veterans.  He started For Art Sake in the emirates in 1996, now the leading supplier of custom props, set design, and construction, and established Artfx Canada in 2005.  Now he runs both operations and shuttles between Dubai and Toronto managing both local and international projects.

Being nominated at the 2017 Canadian Screen Awards for ‘Best Production Design or Art Direction in a Nonfiction Program or Series’ was a major career triumph for Andronico. However, the journey toward his present professional standing was far from easy. He shares: “Being a Filipino is like being a soldier with lots of weapons.  You’ve been through harsh environments, tough experiences.  It’s my training ground.  When you become successful, you don’t realize how important it is what you have learned.”

“You don’t create just to sell.  You create because you love”. A craftsman of work that speaks for itself, Andronico believes in the sheer power of remaining authentic to one’s interests in any venture. “Be honest. When you create something honest and bold, people start recognizing it”.

Gamechanger – Chef Earl Roland Puse Born in Paris to Bulakenyo parents and raised in London, Chef Earl Roland Puse comes from a background steeped in multicultural culinary influences. He has honed his skills at a variety of world-class restaurant brands, including the Conran (now Plateau Restaurant – Canary Wharf), La Petite Maison in London …

Thoughtleader – Rudstin Estrellado Marketing Professional  Not many young people can say that they have made an impact in their chosen field in so little time but for Rudstin Estrellado, Digital Marketing Executive at the Apparel Group, these are words can be spoken with utmost confidence. Handling several international brands, this young gun has brought …

To paraphrase a certain pop star, “Art makes the people come together.” That’s exactly what Rollan’s art has been doing. His talent is so immense that it has become contagious – infecting those around him with an irrepressible spirit of creativity that compels them to do bigger, better things with their talent. He has built communities around his media, and has inspired movements towards a higher appreciation of Pinoy aesthetics. 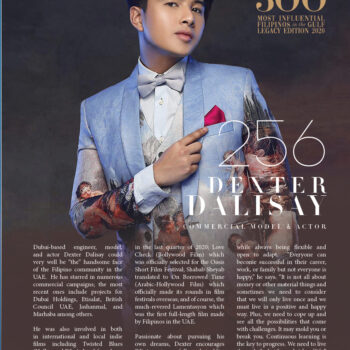 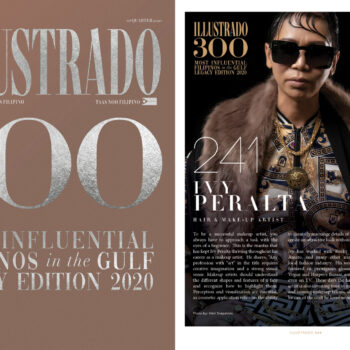 Ivy Peralta – Illustrado 300 Most Influential Filipinos in the Gulf