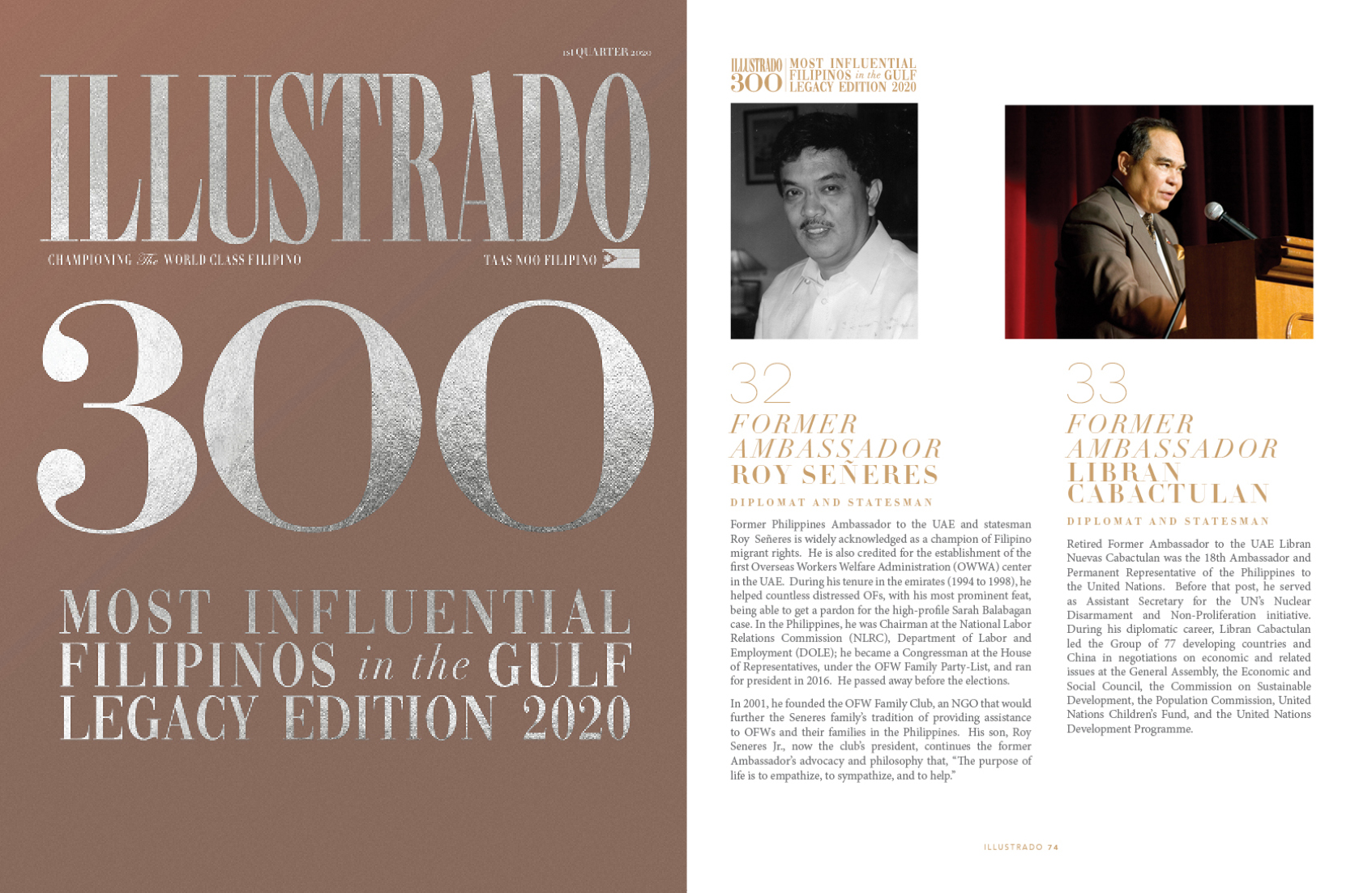 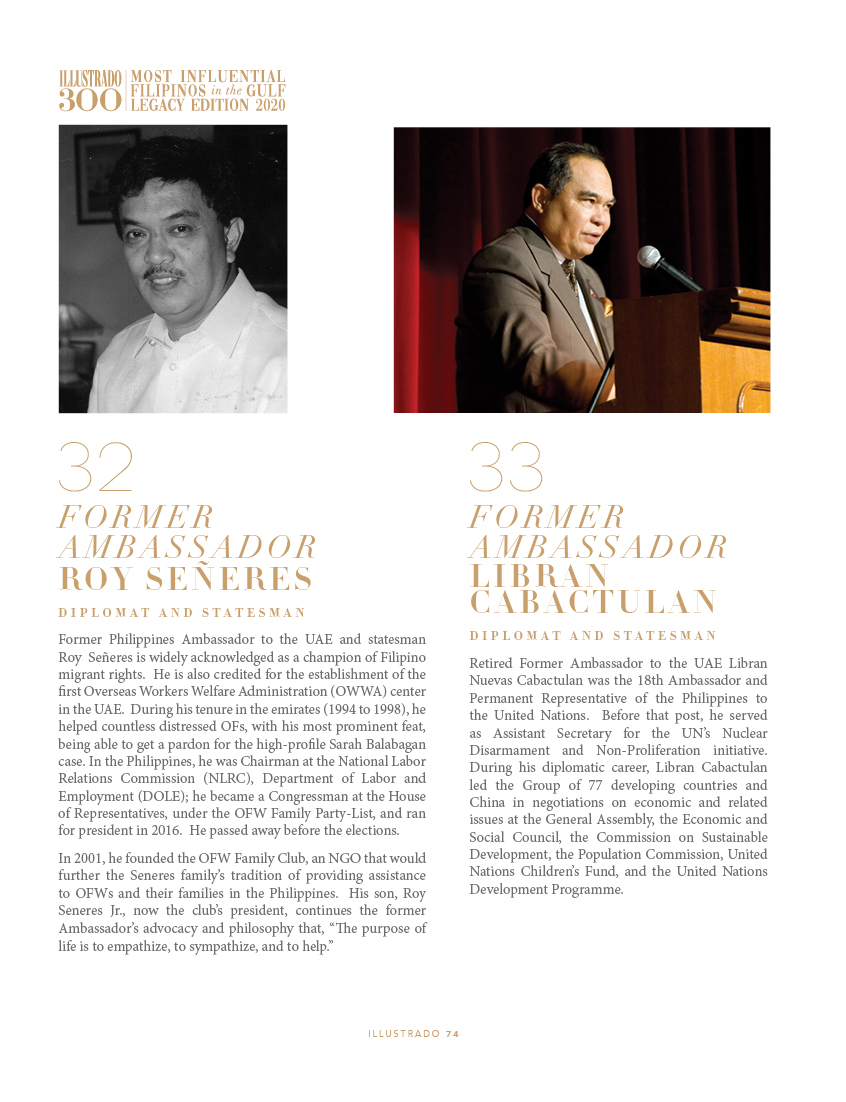 Former Philippines Ambassador to the UAE and statesman Roy Seneres is widely acknowledged as a champion of Filipino migrant rights.  He is also credited for the establishment of the first Overseas Workers Welfare Administration (OWWA) center in the UAE.  During his tenure in the emirates (1994 to 1998), he helped countless distressed OFs, with his most prominent feat, being able to get a pardon for the high-profile Sarah Balabagan case. In the Philippines, he was Chairman at the National Labor Relations Commission (NLRC), Department of Labor and Employment (DOLE); he became a Congressman at the House of Representatives, under the OFW Family Party-List, and ran for president in 2016.  He passed away before the elections.

In 2001, he founded the OFW Family Club, an NGO that would further the Seneres family’s tradition of providing assistance to OFWs and their families in the Philippines.  His son, Roy Seneres Jr., now the club’s president, continues the former Ambassador’s advocacy and philosophy that, “The purpose of life is to empathize, to sympathize, and to help.”

Retired Former Ambassador to the UAE Libran Nuevas Cabactulan was the 18th Ambassador and Permanent Representative of the Philippines to the United Nations.  Before that post, he served as Assistant Secretary for the UN’s Nuclear Disarmament and Non-Proliferation initiative.  During his diplomatic career, Libran Cabactulan led the Group of 77 developing countries and China in negotiations on economic and related issues at the General Assembly, the Economic and Social Council, the Commission on Sustainable Development, the Population Commission, United Nations Children’s Fund, and the United Nations Development Programme.

In the emirates where he served from 2003 to 2009, Amba Cabactulan was a well-loved public servant who worked hard to serve both the government and the Filipino people.  During his tenure, he facilitated the signing of a Memorandum of understanding between the UAE Ministry of Labor and the Philippine Labor Department to provide greater protection for Overseas Filipinos.

It isn’t easy being the Philippine Consul-General – and it sure is doubly more difficult when you are assigned to one of the busiest, most demanding OFW epicenters in the world.

Albert Tranquilino – Illustrado 300 Most Influential Filipinos in the Gulf

Thoughtleader – Albert Tranquilino  Entrepreneur How does one rise from a life of poverty to lead a world-class company that’s patronized by the elite of the UAE?  Ask Albert Tranquilino, whose story is not just compelling, but also quite inspiring. Albert was already working at the age of 12 as a janitor to support his …

Of the legacy he wishes to impart to fellow Filipinos,Michael Amazona Del Mar had this to say: “I would like to be remembered as the person who started the casting direction revolution in Dubai – the person who standardized the Quality of Fashion Show Models across the board and established protocols by which model agencies now abide.

With her grace, warm attitude and cheerful smile, it is sometimes hard to imagine that a consummate lady like Mary Jane Alvero Al Mahdi could figure so highly in a company that deals with corrosives, construction material and nuclear testing, and yet she does.

Brusko Barbers – Illustrado 300 Most Influential Filipinos in the Gulf 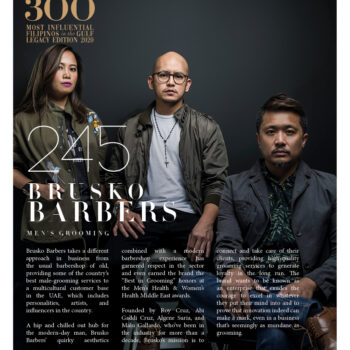 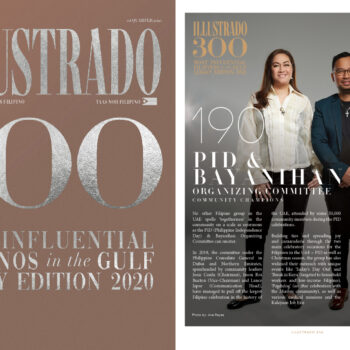