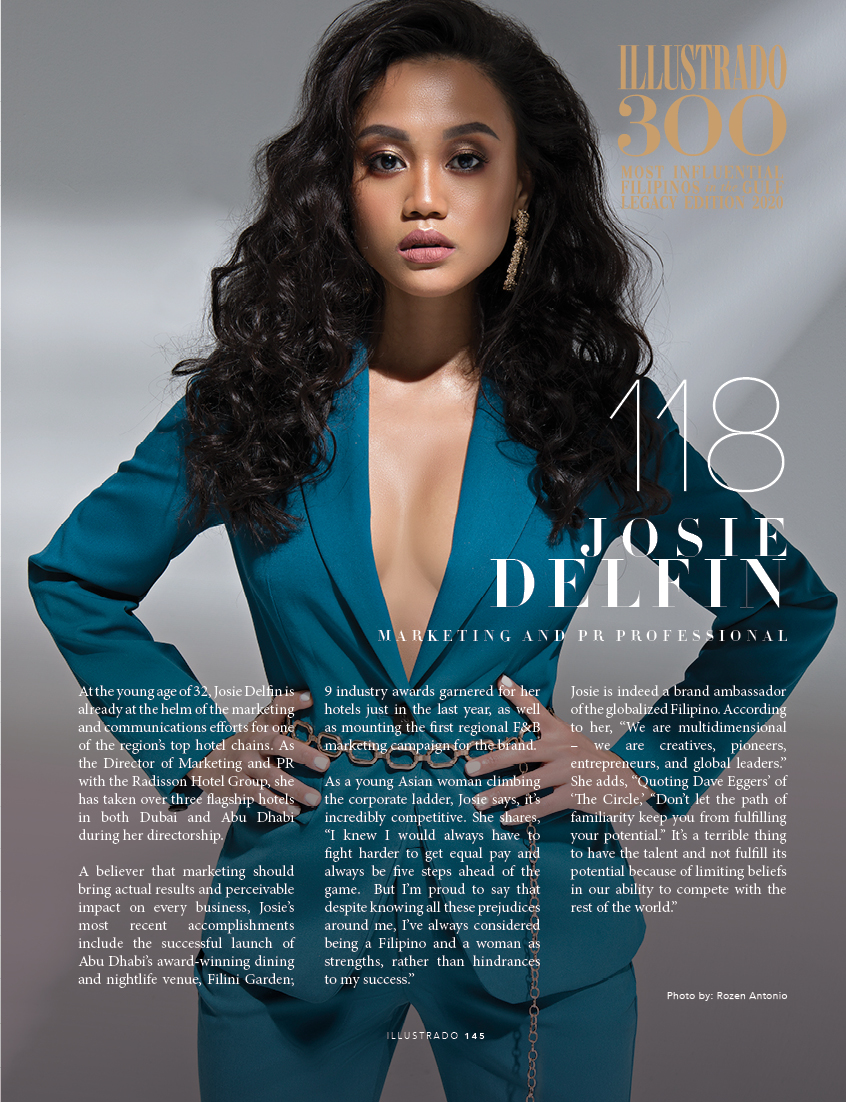 At the young age of 32, Josie Delfin is already at the helm of the marketing and communications efforts for one of the region’s top hotel chains. As the Director of Marketing and PR with the Radisson Hotel Group, she has taken over three flagship hotels in both Dubai and Abu Dhabi during her directorship.

A believer that marketing should bring actual results and perceivable impact on every business, Josie’s most recent accomplishments include the successful launch of Abu Dhabi’s award-winning dining and nightlife venue, Filini Garden; 9 industry awards garnered for her hotels just in the last year, as well as mounting the first regional F&B marketing campaign for the brand.

As a young Asian woman climbing the corporate ladder, Josie says, it’s incredibly competitive. She shares, “I knew I would always have to fight harder to get equal pay and always be five steps ahead of the game.  But I’m proud to say that despite knowing all these prejudices around me, I’ve always considered being a Filipino and a woman as strengths, rather than hindrances to my success.”

Josie is indeed a brand ambassador of the globalized Filipino. According to her, “We are multidimensional – we are creatives, pioneers, entrepreneurs, and global leaders.” She adds, “Quoting Dave Eggers’ of ‘The Circle,’ “Don’t let the path of familiarity keep you from fulfilling your potential.” It’s a terrible thing to have the talent and not fulfill its potential because of limiting beliefs in our ability to compete with the rest of the world.”

Most Influential Filipinos in the Gulf: Wywy – Tastemakers

The Middle East teems with talented Filipino musicians, but every once in a while, an act rises above the crop and proves to be of a different, more transcendent and audacious sort of mettle. Case in point: WYWY. Manned by the real life couple, Mckie & X, WYWY’s music is a compelling mix of electronica, synthpop, and torch singing, reminiscent of the 90’s stylings of Portishead and Bjork. There is nothing typical about it, especially in this day and age – which makes listening to it feel almost like an act of defiance.

Most Influential Filipinos in the Gulf: Rosan Katlea Reodica – Tastemaker

It took about ten years of courage and practice for Rosan Reodica to finally realize that she was great at writing, and that she wanted to pursue it in some way. With an exciting career in the design and events industry, Rosan is grateful to be surrounded by like-minded individuals who espouse creativity with the same level of gusto as she does.

Filipino Legacies in the Gulf: The Tajanlangits & Remedios Estrada Chu

The Tajanlangits Musicians Many musically-inclined Filipinos in Dubai back in the late 1980s through to the early 2000s would have been touched by the musical genius of the Tajanlangits.  Once referred to as the Filipino Von Trapp family (from the Von Trapps of The Sound of Music), the Tajanlangits, composed of Victorino Tajanlangit, his concert …

Bethoven Filomeno Educator & Photographer  Rising photographer, Bethoven Filomeno is a fervent creative media educator who equips his students with the knowledge and practical expertise to be instruments of change. Teaching for the last 15 years, he shares that the most significant part of his job is empowering those under his tutelage: “As an educator, … 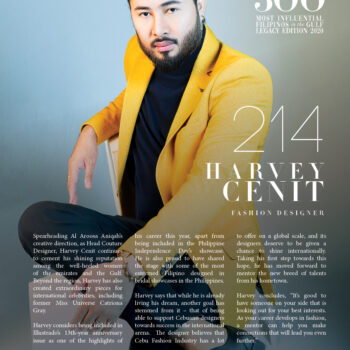 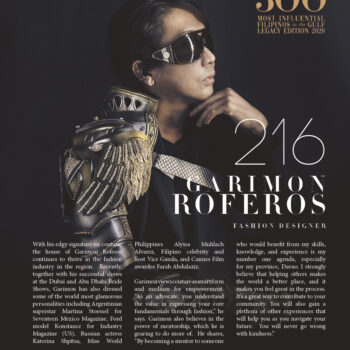