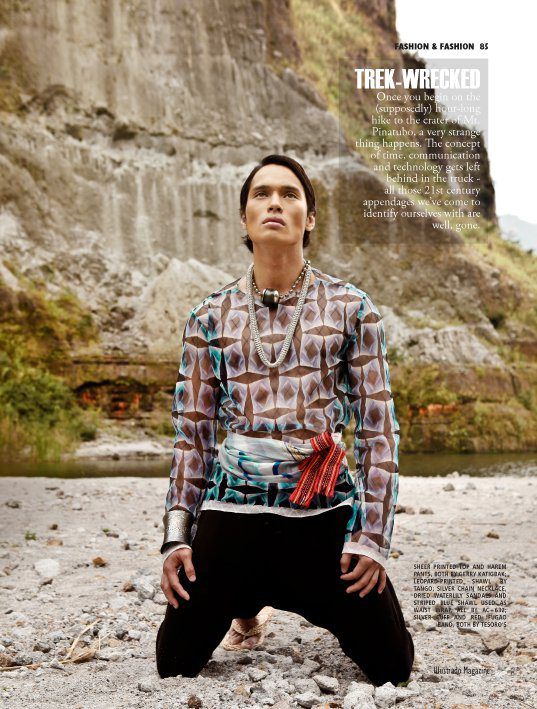 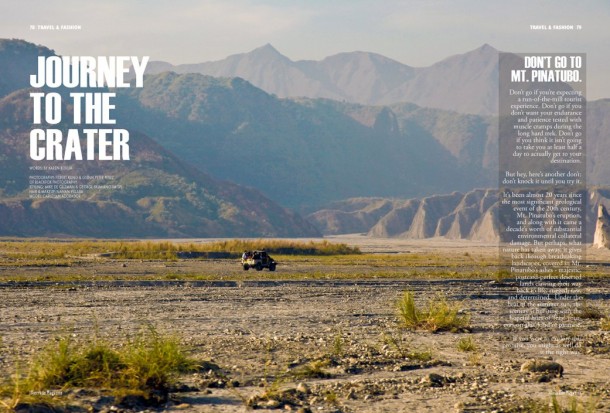 Don’t go if you’re expecting a run-of-the-mill tourist experience. Don’t go if you don’t want your endurance and patience tested with muscle cramps during the long hard trek. Don’t go if you think it isn’t going to take you at least half a day to actually get to your destination.

But hey, here’s another don’t: don’t knock it until you try it.

It’s been almost 20 years since the most significant geological event of the 20th century, Mt. Pinatubo’s eruption, and along with it came a decade’s worth of substantial environmental collateral damage. But perhaps, what nature has taken away, it gives back through breathtaking landscapes, covered in Mt. Pinatubo’s ashes – majestic, postcard-perfect deserted lands clawing their way back to life, rugged, raw, and determined.  Under the heat of the summer sun, the scenery is bursting with the hopeful hues of ‘feast-your-eyes-on-this’ kind of promise.

If you were to explore this promise, you might as well do it the right way.

We were ushered into the first leg of our Pinatubo adventure by rugged 4×4 trucks. Travel Factor’s use of the hardwearing vehicle provided an intimidating yet accessible ride.  The 4×4, a master of all terrains that seemed to recognize the topography like an old friend. Once you get over the mandatory jolt, thump and crash, it’s unlike any other terrestrial transportation you’ve ever been on. It’s the ultimate compromise between the tourist and the adrenaline junkie, which appeases both the sightseeing and the thrill-seeking requisites of the trip. 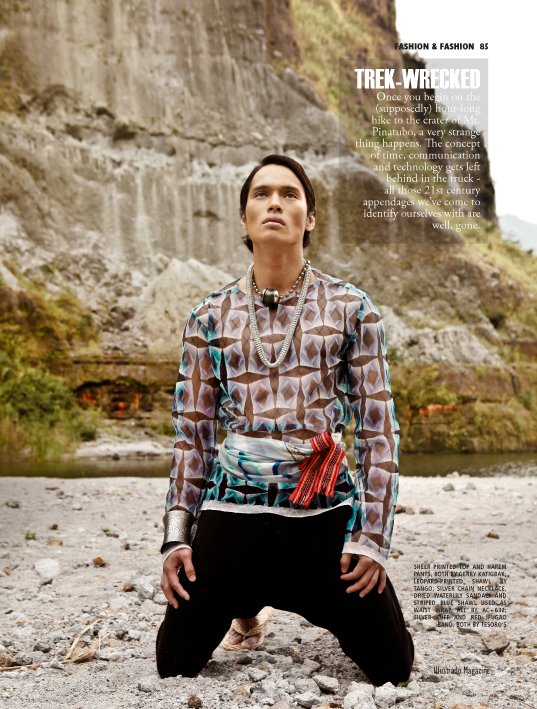 At our truck stop mid-way, we were able to admire the beauty on standstill; untapped and wild. Here, one can’t help but be in awe. Some of the locals may have already pegged us as peculiar, for taking photos in a place they consider merely as home. Halfway through our journey, we encountered an incline, a treacherously steep one, and even before we could weigh in on the odds that our trucks won’t plummet downwards, we were back on our seats, moving towards the aptly named route, the Skyway.

It was a one-way alley that could only fit one truck, sandwiched between elevated plateaus. The repetitive uphill-downhill movement makes one think that the excavated road is limitless or maybe a result of some paranormal activity where you just keep going back to where you came from. It could be that the ashes had obstructed a portion of our vision, but doubt inevitably creeps in when, for over 25 minutes, there was you, your companions, and your truck-against the vast territories of nature, impeded by the limits of the human senses. Thankfully, the endlessness did have an end. 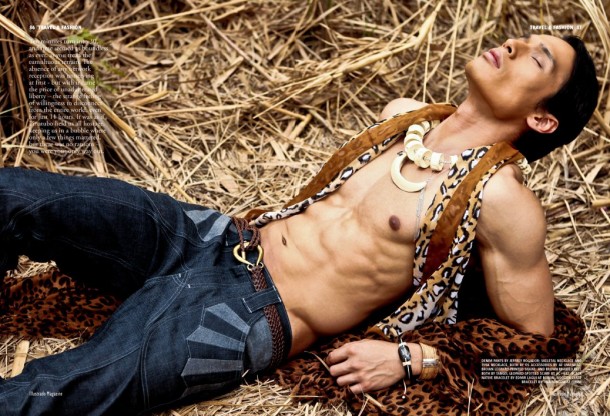 But Pinatubo isn’t just about to let you get away with it so easily. After lahar composites clung all over your body, and you’ve adapted to the robust springing up and down (and even sideways), you leave the ‘comforts’ of that hour-long ride, to stand on your own two feet, and embark on a Trek to Remember.

Once you begin on the (supposedly) hour-long hike to the crater of Mt. Pinatubo, a very strange thing happens. The concept of time, communication and technology gets left behind in the truck – all those 21st century appendages we’ve come to identify ourselves with are well, gone. 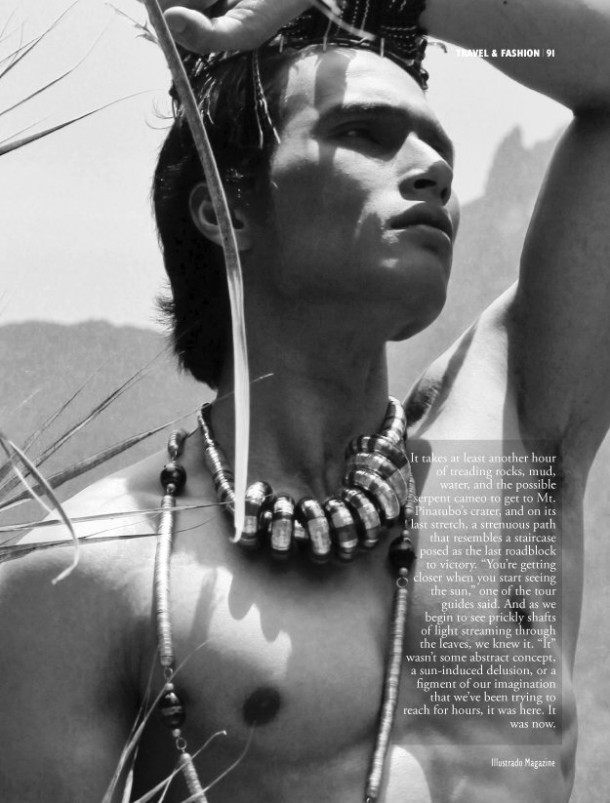 Ten minutes turn into 30, and time seemed as boundless as ever, as you tread the tumultuous terrain. The absence of any network reception was unnerving at first – but with it came the price of unadulterated liberty – the strange feeling of willingness to disconnect from the entire world, even for just 11 hours. It was as if Pinatubo held us all hostage, keeping us in a bubble where only a few things mattered, but there was no ransom – you were your only way out.

The arrest, though, is a gift that kept giving. But Mt. Pinatubo heeded a two-way relationship, in which you’d have to give something back, too. In this case, it was every fiber, every inch of muscle in your body, fighting their way through all kinds of rocks, altitudes, formations and slopes; and with every trickle of sweat came the reward of getting closer to the destination, the pinnacle and purpose of the entire journey in the very first place.

It takes at least another hour of treading rocks, mud, water, and the possible serpent cameo to get to Mt. Pinatubo’s crater, and on its last stretch, a strenuous path that resembles a staircase posed as the last roadblock to victory. “You’re getting closer when you start seeing the sun,” one of the tour guides said. And as we begin to see prickly shafts of light streaming through the leaves, we knew it. “It” wasn’t some abstract concept, a sun-induced delusion, or a figment of our imagination that we’ve been trying to reach for hours, it was here. It was now. 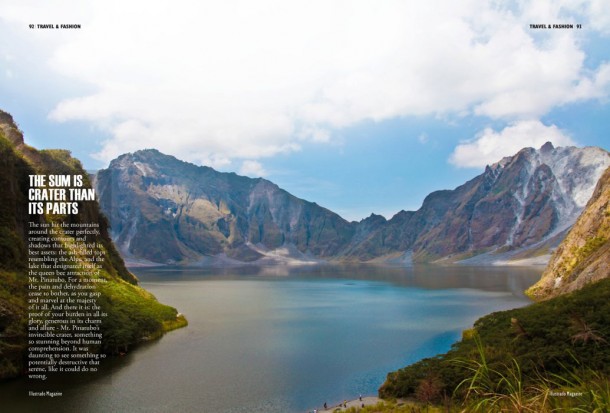 The sum is crater than its parts

The sun hit the mountains around the crater perfectly, creating contours and shadows that highlighted its best assets: the ash-filled tops resembling the Alps, and the lake that designated itself as the queen bee attraction of Mt. Pinatubo. For a moment, the pain and dehydration cease to bother, as you gasp and marvel at the majesty of it all. And there it is: the proof of your burden in all its glory, generous in its charm and allure – Mt. Pinatubo’s invincible crater, something so stunning beyond human comprehension. It was daunting to see something so potentially destructive that serene, like it could do no wrong. 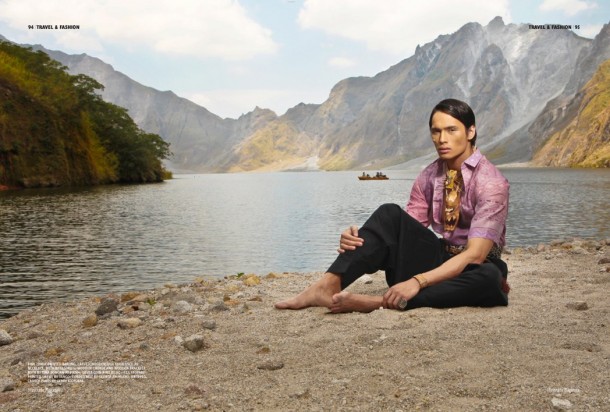 Choirs of angels seemed to ring in my ears as I took the final steps back to our 4×4 truck. Parched and nearing fatigue, I tried to recall how we all ended up looking like we had such a dreary predicament (that was only partially true). Our journey began in Capas, Tarlac, by a security checkpoint called “Garden of Eden.” Little did we know, the noncommittal biblical reference was every bit prophetic, and with surprising accuracy.

So here’s something you hear often: if there’s anything we humans can’t resist, it is trying something for the first time – even going as far as wandering through that Garden of Eden. 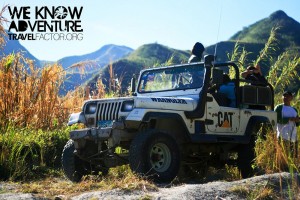 Travel Factor has been providing accessible adventure tours since 2006, and with its current lineup of Surfvivor, Dive, Backpacking, Foodtrip, Photoholic and Conquer, one is provided maximum adventure through maximum variety. The Mt. Pinatubo Conquer adventure begins in Capas, Tarlac, and covers all bases, including roundtrip van transfers, 4×4 vehicles, and local guides – ensuring that the only fuss you’re left to worry about are the clothes off your back, the contents of your backpack, and the physical limits you’re willing to overcome during your excursion. For more information e-mail tours@travelfactor.org or phone Team TF at +632-746 5119, +632-964 2527, +63917-847 5341. Also check-out thetravelfactor.wordpress.com

Ulysses King at Bobon – Markatti Palazzo at The Podium, Ortigas

Most Influential Filipino in the Gulf: Eric Elnar – Trailblazer

Filipino designer Francis Izhcka Zeta has crafted a name for himself as one of the UAE’s most sought-after haute couturiers. With a skilled eye for intricate and imposing details, his stunning designs enjoy an international clientele, making him a strong sartorial force in the Middle East.

Filipino Trinidad and Tobago: In the birthplace of steelpan, calypso, soca and limbo, nurse Joey Buo shares with us her carnival of a Pinoy Life Port of Spain

Most Influential Filipinos in the Gulf: Christopher Transmano – Tastemaker

More than just an ambassador of brands, he is an ambassador of his Filipino heritage. Christopher explains: “I’ve always had the need to mention that I’m a pure blooded Filipino dance artist whenever I introduce myself and I can’t wait to go back to the Philippines and share the hip-hop culture.”