Candy Couture: An OTT Ode to the 80s with Illustrado's Ones to Watch in Fashion - Illustrado Magazine - Filipino Abroad 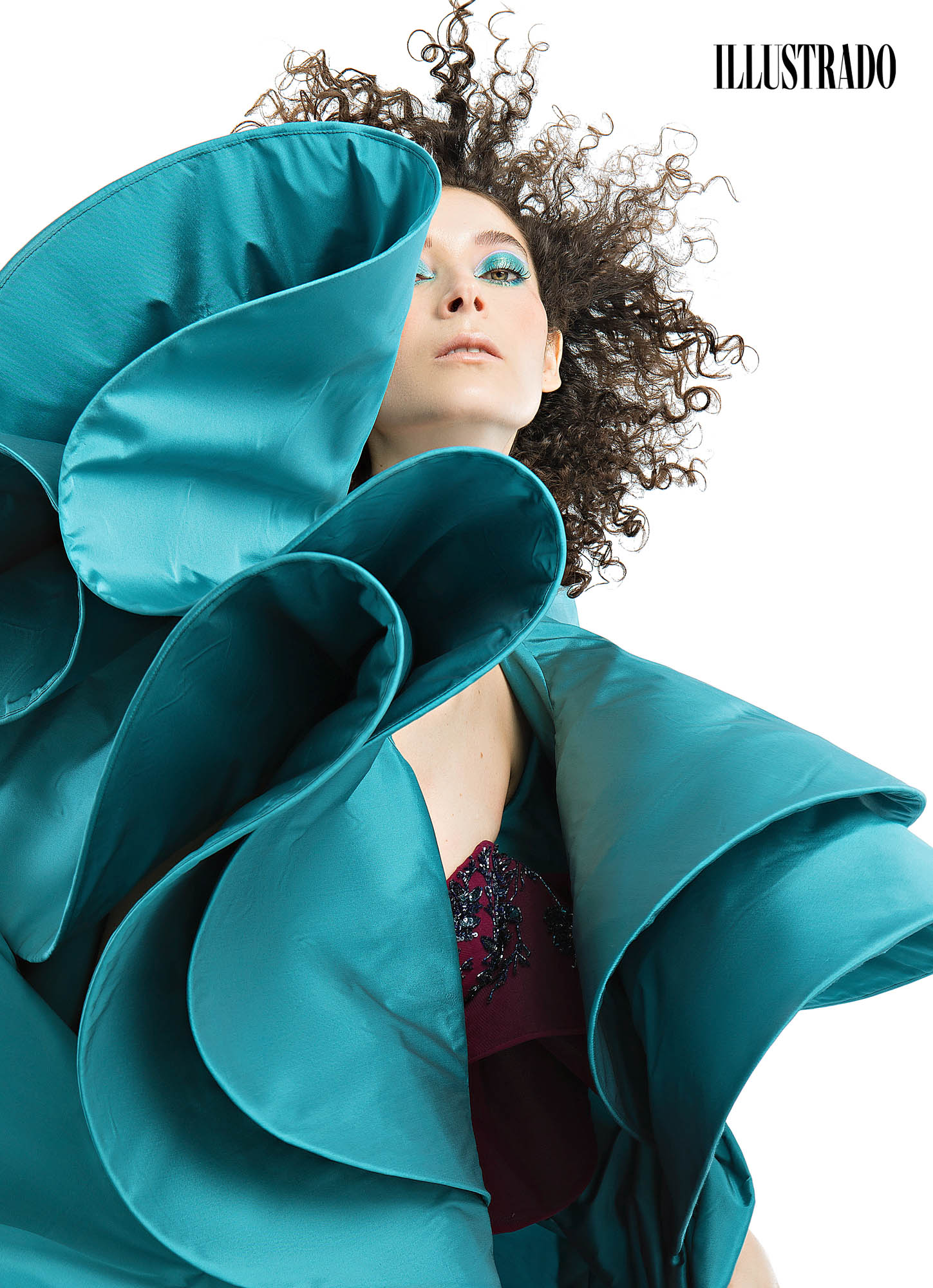 The era of big hair, big shoulders, new wave, funk, Dallas and Madonna has been feeding the frenzy of fashionphiles, especially with shows like Pose, The Get Down, Guardians of the Galaxy and even the nerdy Stranger Things gaining in cult following in recent years.  Nowhere in the last decade has cheesy nostalgia and vintage aesthetic been so uber cool with a revisiting of the era laced with all the funkiness and OTT (over-the-top) touches, but minus the awkwardness and the bad hairdos.

Just as the 80’s style and cultural inspirations have crept surreptitiously into pop consciousness lately, Illustrado’s Ones to Watch in Fashion this season have been steadily building up their couture cred in the international, regional and local circuits conquering hearts and runways steadily.  Currently, in varying stages of their careers, these UAE-based Filipino designers share something in common in that together, they are a rising force to reckon with slated to earn their space with the best names in the business. 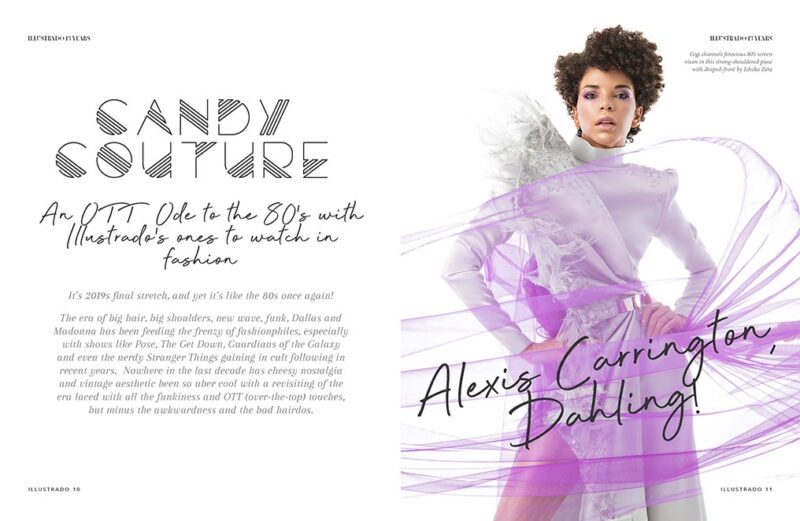 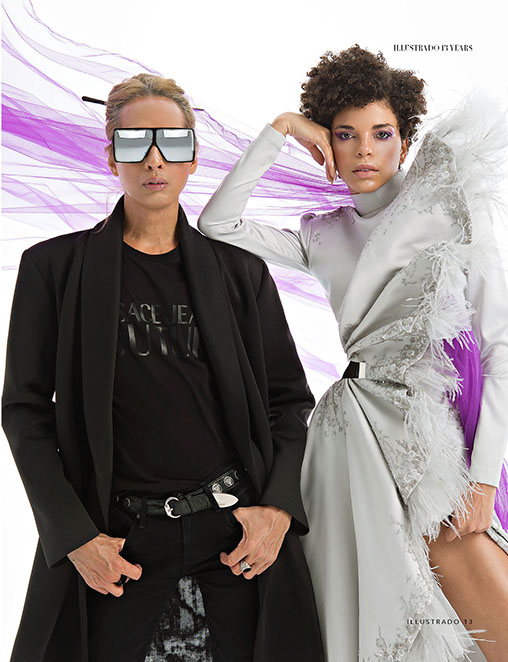 Francis “Izhcka” Zeta Creative Director at Jacy Kay, grew up dreaming about dressing his elegant muse Audrey Hepburn from as far as he can remember.  But for us, if there was a significant fashion icon from the past who surely embodies his fashion values it would be an edgy Marie Antoinette – unabashedly opulent, elegant, rooted in the classics but with a fresh spin, unique, grand.

Izhcka’s fashion statements are inspired by a myriad of curious things from baroque details to the unusual like dark butterflies, moths and lizards, translated masterfully into works of art with intricate embellishment that demand painstaking manhours.  He shares his design philosophy – “It is hard to pinpoint what makes my design style as it can vary according to mood and necessity. My artistic sensibility is such that I can capture a classical Baroque style and also finds myself pondering and working on a modern dress that can be an abstraction of the 21st-century look and feel. I can be working on a stylish floral-themed wedding this week and a goth-inspired theme for a royalty’s daughter. Flexibility, I guess. Or probably just being non-dimensional. Design for me is not just pitting different elements together to form a narrative, but it is about the polyphonic coming together, like the beautiful music coming from an orchestra in the opera house. Each instrument is unique and different, yet the harmony produced creates a story that is understood and is worthy of a standing ovation. Design mirrors that. The coming together of all unique elements in sometimes elegant, minimal, often grand manner, producing awe at the present moment and remembered as a beautiful memory that may become the standard.”

With his eye for detail, the instinct for the unique and his natural predilection for the tasteful, he could easily belong to a couture house in Paris.  Hence it was no surprise when he wowed the discerning Parisian couture crowd with his first-ever runway show with his collection “Monarchs of the Opera” which was equal parts stylish and intellectual.  His new collection is set to appear at two other major fashion shows abroad this year.

His eyes and hopes fixed firmly on the international couture scene, while his work is already well-known and highly sought after in the region, Izhcka’s career path is quite distinctive compared to his peers, just as his eccentric persona and dramatic demeanor cut a different figure from everybody else.

Drama in the Opera 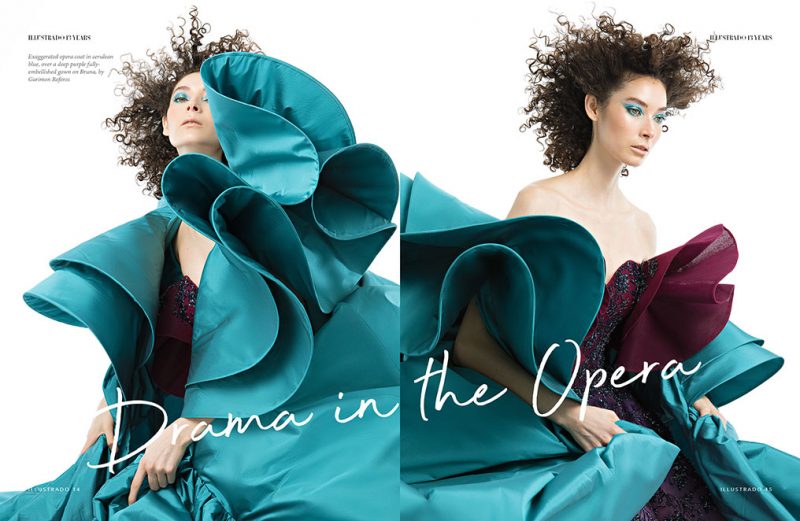 A number of prominent Hollywood and Bollywood stars, international beauty queens, Filipino celebrities, including the Philippine President’s first granddaughter all share one couture label in common – Garimon Roferos, which they have worn during some of their most notable fashion moments in the public eye.

Slims Fashion School-educated Garimon, who was also the 2004 winner of the Concours International Des Jeunes Creatures de Mode in Paris France, has gone a long way since he first got his break in the industry in Riyadh in the ’90s.  Now with his fashion house firmly established in Dubai, Garimon takes pride in creating gowns and other custom garments in his signature style characterized by a feminine silhouette with an artistic edge, realized through distinctive crafting.  Well known in the local and regional market, Garimon has been dominating recently in the bridal show circuit and has received acclaim not only from clients in the Middle East but also requests from discerning brides in Europe and Asia.

Beyond his success in the region, Garimon dreams of staging his own show within the prestigious fashion weeks of Paris, New York, and Milan.  With his distinctive artistry and skills, as well as his pragmatic sensibilities and ability to deliver in his field, that aspiration is a viable reality in the very near future. 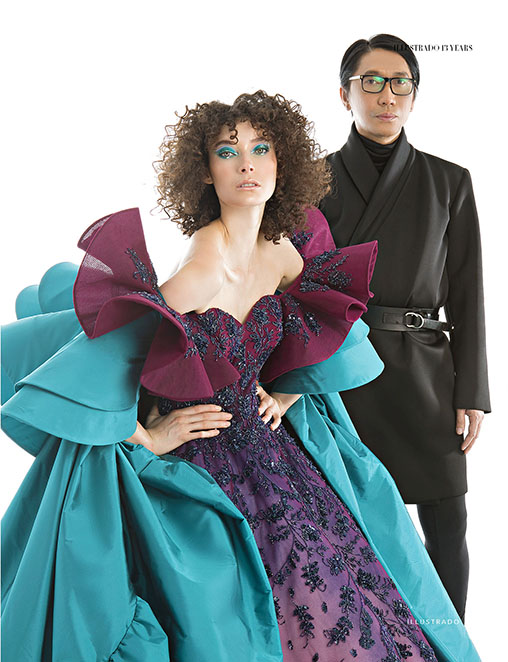 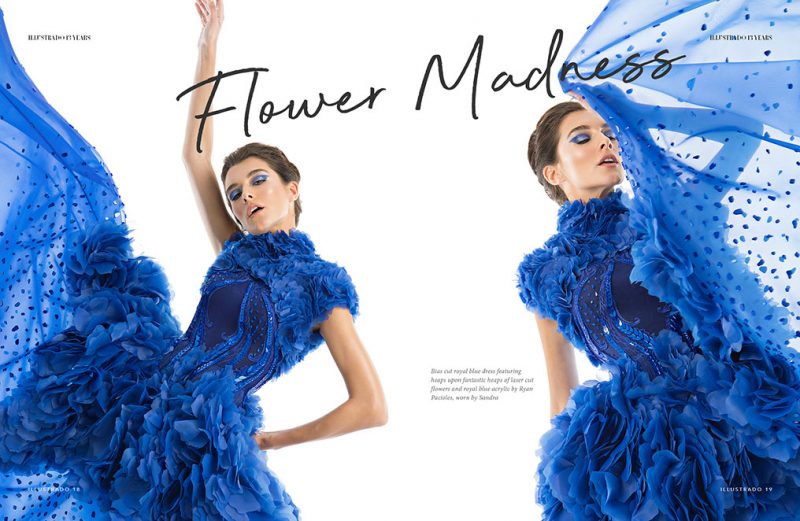 Funneling creative steam behind the rise of Atelier Zuhra is the modest designer with a cheeky mien Ryan Pacioles.  As the creative force behind the glamorous UAE-based Omani fashion house, Ryan known for his lavish, elegant and ultra-feminine designs always steeped in luxury, has won over royals and celebrities alike.  With an impressive ascent since their debut in Fashion Forward in 2017, Ryan’s designs have been worn around the world from parties of the elite, celebrity red carpets to prestigious runways including Dubai, Paris, London, and Moscow.

Of his process for creating, Ryan explains, “I always wanted to change things, to develop my own aesthetic whether it be based on a painting, a film, or an abstract concept, inspiration is all around us.  I believe in lightness, fragility within the couture capsule. I create dreamy and luxurious dress confections for a woman who wants to feel like a real queen or a princess, with glorious whimsical details to cure and feed everyone’s romantic soul and fantasies.”

Serving as a guide throughout his career, Ryan swears by this quote by American playwright, raconteur, and entrepreneur Wilson Mizner: “Be nice to people on your way up because you’ll meet them on your way down.” 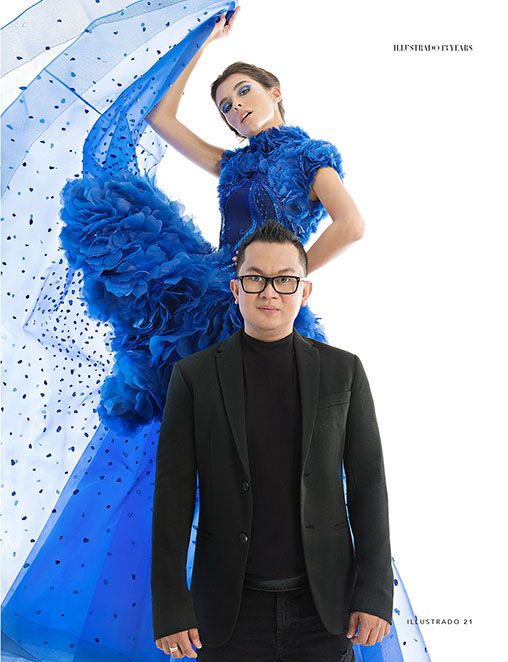 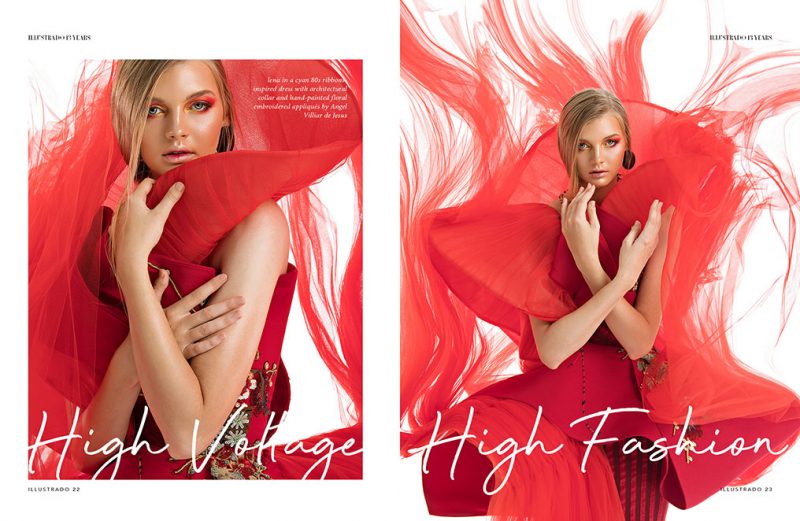 Angel Villiar de Jesus pays homage to curves and the female silhouette as the basic foundation of all his creations, earning him a distinct identity as a designer.  The Managing Partner and Designer at Maro’Sha Ricci Fashion, he opened his couture house in Dubai with business partners nine years ago, after gaining experience working for a prominent couturier in the emirates.  He considers having the privilege to grow his fashion business and prosper in the very competitive market in the UAE his modest achievement.

Ever the wanderluster, the soft-spoken and thoughtful designer shares he finds inspiration in nature and its different seasons.  He says, “Whenever I travel, I feel my ability to create is renewed.”  He adds, “The people around me, whether good or bad, also inspire me to be the best version of myself.”   Asked what is it that will make him feel that he’s reached the zenith of his chosen career and passion, he remarks, “When I’m sitting at my beachfront in Palawan with my family, close friends, and my dogs, while my brands are moving strongly and enabling me to support my travels and adventures, that’s when I’ll feel I’ve finally made it.” 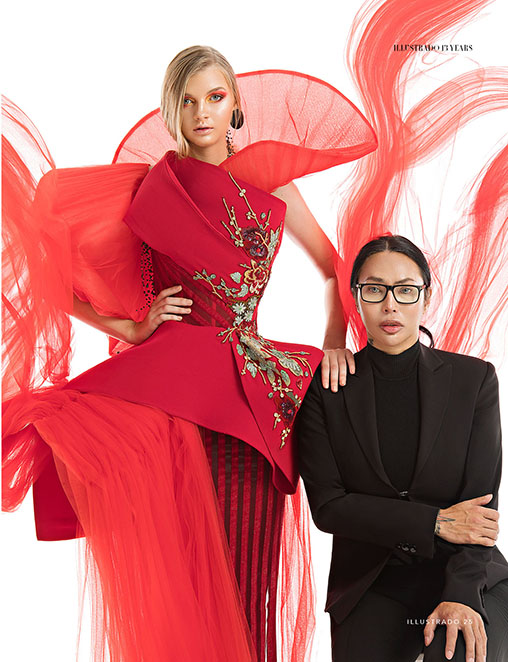 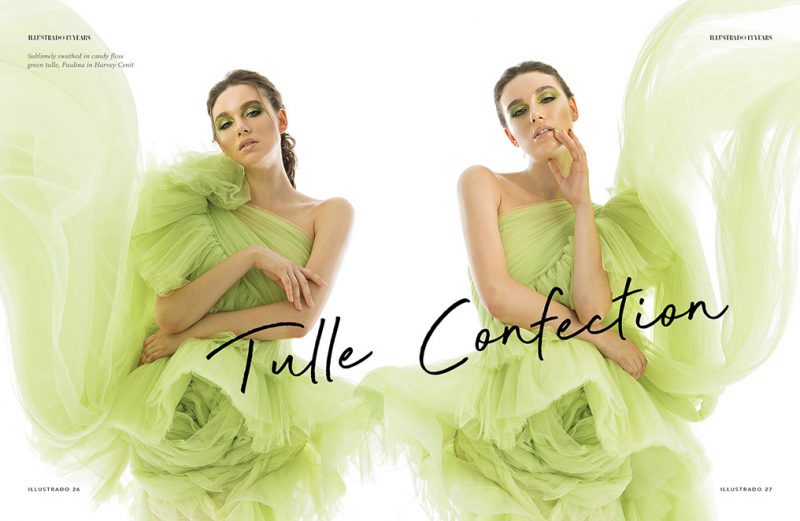 Steadily on the rise and reinforcing his name among the UAE’s fashion elite at each turn, designer Harvey Cenit has garnered a following in the UAE and beyond the Middle East. He has become a designer of choice for many of the country’s affluent and fashionable and has also dressed a handful of prominent Filipina muses including reigning Miss Universe 2018 Catriona Gray, indie actress Mercedes Cabral, Barbie Imperial, and singer Morisette Amon.

In less than half a decade, he has achieved a level of success in the industry – a feat that would often take more than double the time for many others. He is the head couturier of Al Aroos Aniqah – a highly revered label among Emarati women, famed for its opulent designs and forte within the bridal field.

His creations are conceived to uplift not only the female form but also the female psyche – all at once feminine and powerful. His pieces are elegant, sophisticated and tastefully embellished catering to the fancies of his discerning wearers.  To Harvey, the ultimate muse is a woman who is strong, independent, and sweet at the same time. He says, “Like an orchid, the Harvey Cenit woman does not need bees to pollenate it; nor a man for her to feel like a woman.  She is always empowered and graceful.” 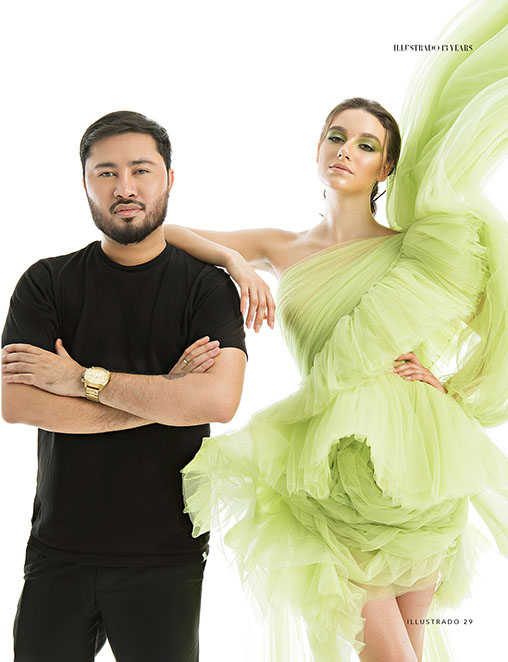 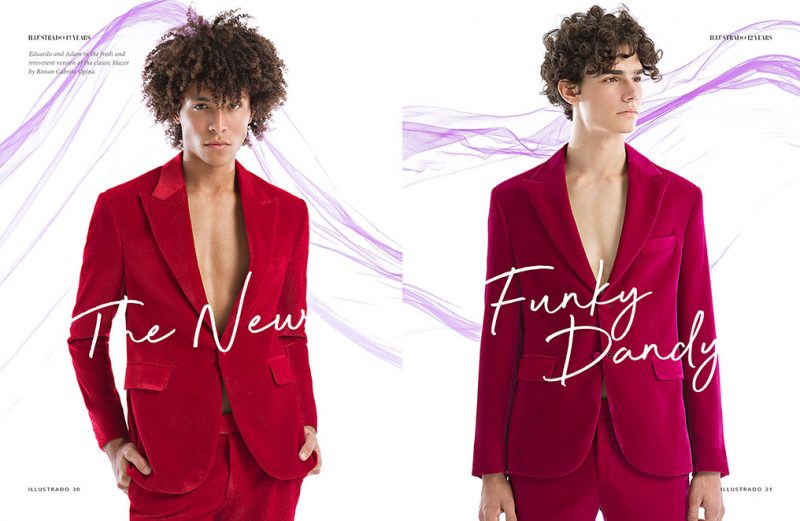 Ronan Cabrito has been a key talent in helping shape Michael Cinco Couture’s burgeoning menswear line working under the creative direction of “The Impalpable” designer himself.  Having been a pivotal member of Michael’s team for the last seven years, Ronan’s keen sense of style coupled with his deep understanding of production as well as fabrics has made him an invaluable member of one of Dubai’s most prominent fashion houses.

With his love for timeless classics and the desire to always find within it, its fresh expression, Ronan delights in working with vivid colors, textures, and embellishments turning what is familiar and expected into pieces that look totally new and current.  “My dream client is Leonardo di Caprio,” Ronan shares.  “His style is classic, timeless, and yet he is very much contemporary.”

As a rising designer in one of the country’s most celebrated ateliers, Ronan has been able to elevate his technical knowledge and experience within the field, placing him in an exciting position ahead of most of his peers.  Undoubtedly, the industry will see more brilliance from this up and coming designer in the years to come. 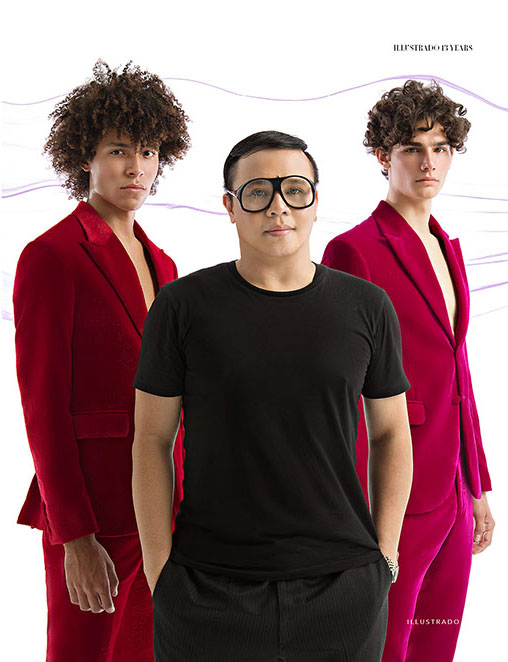 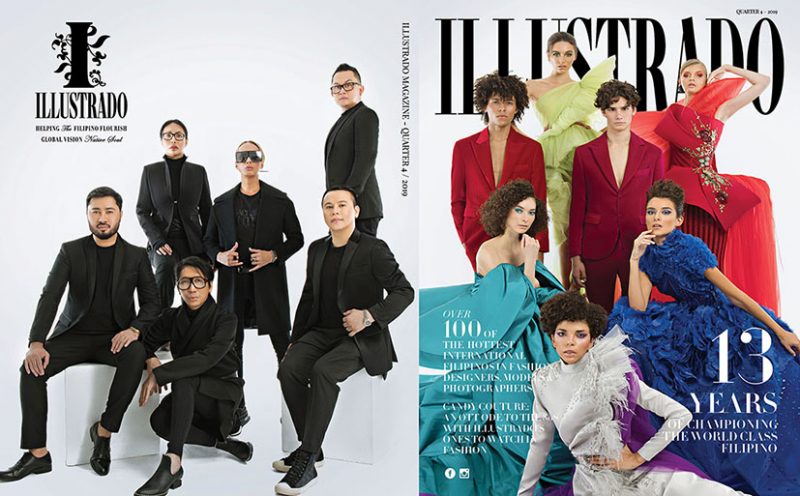 Our Filipino fashionistas are at it again! Whether in cold Canada, Japan, or in mild Philippines and the emirates, these Pinoy style bloggers are certainly making the most of this season’s cold weather!

Not to be outshone by the brilliant season’s lights are these dazzlingly definitive Filipino pieces from the country’s designers with a penchant for our rich and unique sartorial heritage.

Illustrado’s Fabulous Party at the Armani Privé to celebrate its 300MIFG Release February saw a massive gathering of the Filipino community’s crème de la crème like no other, as Illustrado Magazine celebrated the release of their biggest and most anticipated issue yet on the 21st of February. The Illustrado 300 Most Influential Filipinos in the … 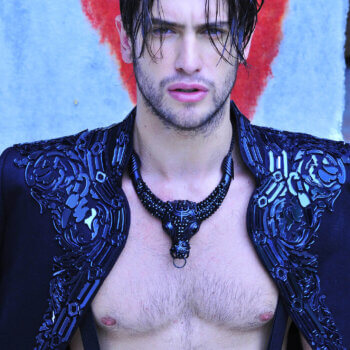 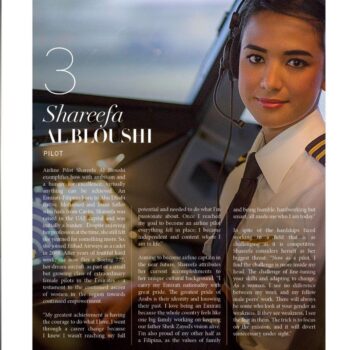