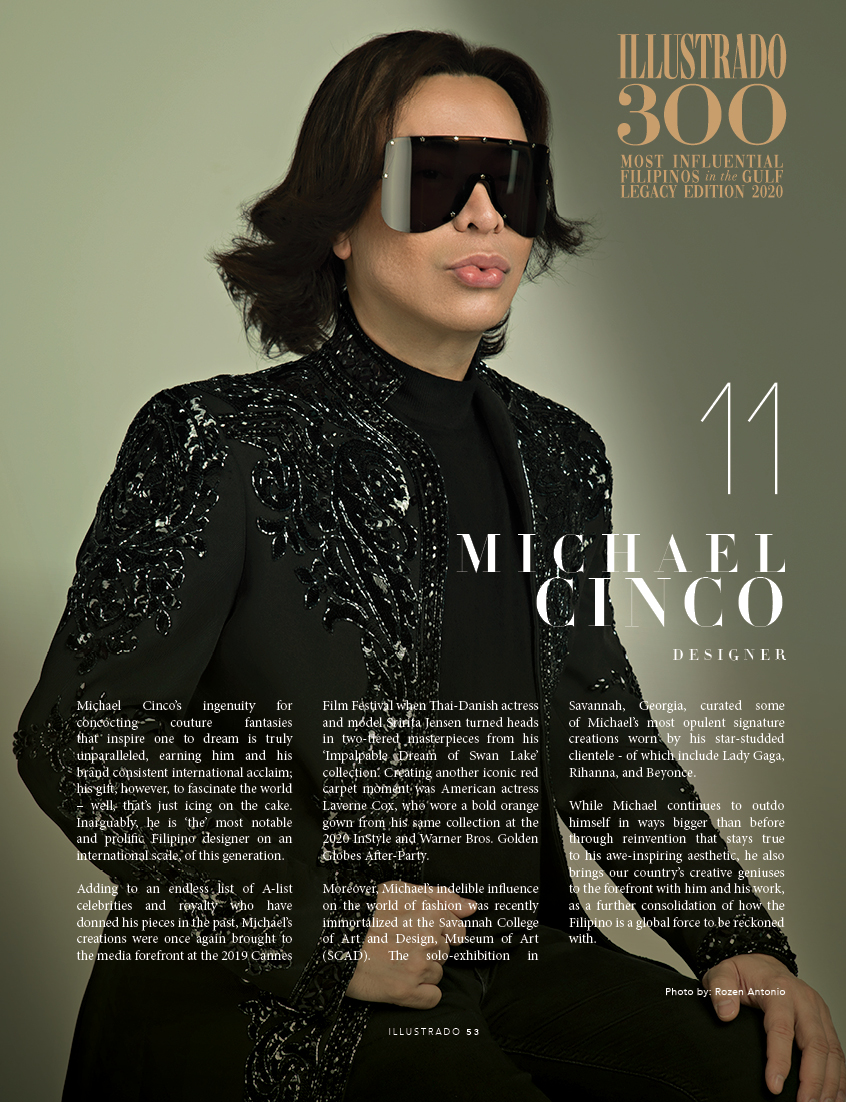 Michael Cinco’s ingenuity for concocting couture fantasies that inspire one to dream is truly unparalleled, earning him and his brand consistent international acclaim; his gift, however, to fascinate the world – well, that’s just icing on the cake.  Inarguably, he is ‘the’ most notable and prolific Filipino designer on an international scale, of this generation.

Adding to an endless list of A-list celebrities and royalty who have donned his pieces in the past, Michael’s creations were once again brought to the media forefront at the 2019 Cannes Film Festival when Thai-Danish actress and model Sririta Jensen turned heads in two-tiered masterpieces from his ‘Impalpable Dream of Swan Lake’ collection. Creating another iconic red carpet moment was American actress Laverne Cox, who wore a bold orange gown from his same collection at the 2020 InStyle and Warner Bros. Golden Globes After-Party.

Moreover, Michael’s indelible influence on the world of fashion was recently immortalized at the Savannah College of Art and Design, Museum of Art (SCAD). The solo-exhibition in Savannah, Georgia, curated some of Michael’s most opulent signature creations worn by his star-studded clientele – of which include Lady Gaga, Rihanna, and Beyonce.

While Michael continues to outdo himself in ways bigger than before through reinvention that stays true to his awe-inspiring aesthetic, he also brings our country’s creative geniuses to the forefront with him and his work, as a further consolidation of how the Filipino is a global force to be reckoned with.

Building a brand is one thing, but staying relevant and exceeding one’s greatest feats is another. Year after year, revered fashion designer Michael Cinco continues to outdo himself in remarkable ways. In 2018, his sheer gift for fashion was underlined on a global scale yet again.

Amongst the numerous celebrities that donned his creations this year were British singer Leona Lewis, opera superstar Zarina Altynbayena, Quincy Brown at the MTV Movie Awards, and Aishwarya Rai who wore a showstopping gown at the 71st Cannes Film Festival that left the media raving. In the landmark film, Crazy Rich Asians, Kris Aquino, who portrays Princess Intan, is seen wearing none other than Michael Cinco. This stands as a truly symbolic moment, as parallel to what the movie champions, the presence of Michael’s work are yet another testament to Asian excellence.

Adding to his endless list of achievements, Madame Tussauds in Hong Kong enlisted the help of Michael to recreate his grandiose Swarovski embellished royal blue ball gown for Miss Universe 2015 Pia Wurtzbach’s wax figure.  In 2019, he is also set to present a cruise collection inside the biggest cruise ship in Asia and was invited to show his pieces for a private millionaires’ gala in Singapore.  Another gala show in Manila is also in the offing, as well as the launch of the designer’s new more affordable bridal luxe line.

With his unwavering love for art and unparalleled craftsmanship intrinsic to his brand, Michael has undoubtedly played a huge role in elevating not only the field of fashion but also our profile as a people. When asked about his advice to Filipinos, he shares:

“I have my mantra: every morning I wake up and begin each day, I think about my goals, impalpable dreams, and ambitions. I always take the time to give thanks to the people that love me and surround my life. Tell the people closest to you that you love them because words have an enormous impact as they touch the lives of others and strike a verbal contract of accountability.”

100 Most Influential Filipinos in the Gulf: Michael Cinco – Fashion Designer

Like his imagination, his career knows no limit. With a name so huge in the fashion industry and a brand so well acquainted with the world’s A-listers and royalty, Michael Cinco continues to inspire fashionistas and Filipinos alike. We asked him what his secret was – Michael voiced: “You have to stay true to yourself and design clothes that you love and want to wear. At the same time, remember that fashion is a business. Know your market.”

With his works lauded on the runway from Dubai, to Manila, New York, London, Miami, Singapore, Los Angeles, Sydney, and then Paris, the red carpets of Hollywood and Cannes, not to mention featured on TV in America, Asia and China’s Next Top Model, as well as countless glossies from pole to pole, Michael Cinco’s dream of becoming a truly global brand someday, seems inevitable.  Inching closer to that aspiration, Michael has recently collaborated with COUTURÍSSIMO – an online brand that sells luxe couture dresses for less, which now has stores in Singapore, Indonesia and now in Manila carrying his prêt-à–porter line.

Amidst of these extraordinary opportunities, Michael notes what keeps him on top of his game, “It’s all about continuously learning over the course of one’s career. I believe that it is important to keep your skills sharp.”  He also remains modest and recognizes the support that allowed him to achieve tremendous feats.  “I always treat my team with so much respect and love. The best lesson I have learned in this business is to accept that there are people who are smarter than me with more expertise with what I’m trying to achieve.  I always try to be humble, ask and learn from them.”