Stunning the crowd once more, Michael Cinco recently unveiled his new impalpable collection at the Burj Khalifa – inspired by the works of Gustav Klimt. Read on as Rex Bacarra recounts his experience at the extravagant runway show, attended by European Royalty.

Nobody dares to blink when two icons collide.

Michael Cinco and the Burj Khalifa. Two icons in a breathtaking moment. One majestically towering over Dubai, confounding the eyes with its facade of silver and crystal glittering as in candlelight, the other proudly towering over the fashion metropolis of the UAE. In the United Arab Emirates, Burj Khalifa is the most visited bucket list find, and the Michael Cinco shows are the most coveted. Both mesmerize, and everybody in the fashion industry knows why.

It baffles me why it took so long for this moment to happen. Of course, Giorgio Armani made his Dubai debut against the iconic backdrop featuring his Spring 2022 collection and couture pieces from his Armani Privé early this year. Still, one that is decidedly “homegrown” by an artist who started and made his mark in Dubai was waiting to happen until Michael Cinco’s The Impalpable Dreams at the Burj Khalifa happened. This alone is a cause both for celebration and commemoration. In global business, they call it the first-mover advantage. In fashion, just like in science, we may be brave to call it a Copernican revolution. An homage to Copernicus, who led the shift from a geocentric understanding of our known universe to heliocentric. One that starts. One where others are bound to follow. Indeed, not just the first Filipino but the first Dubai-based fashion designer to hold a show against the tallest tower in the world.

Both the Burj Khalifa and the Michael Cinco brand are in the business of maximalism, a shy away from being ostentatious. Both are by-products of creative imagination when money is no question yet disciplined in aesthetics. There is control to their superlative luxury; this is why even if both are known to be opulent, highly embellished, and expensive, they exude elegance and tasteful sophistication. When fashion has control, like Michale Cinco’s aesthetics, it defines what true elegance is. It doesn’t just make you admire the wearer, but makes you fall in love. Immediately. There are no apprehensive pauses on what to say. There is only beautiful language in an instant.

The first silhouette appeared a few musical bars after. It signaled a series of more silhouettes in varying degrees of embellishments, of splashes of colors in turquoise, gold, powdery blue, sequined in silver and gold. Then there was the gown with a décolletage collar (or a sweetheart!) which I mentally noted as the ‘first of the fuchsias,’ a phrase I fondly use in this regard as a transitory piece that allows for a fluid transition from cerulean pieces that precede it to mostly indigo after it. A clever choice. In writing, fluidity means using prepositional phrases. In fashion shows, fluidity means creating an equally important, and often stunning, transitional piece that allows the eyes to move along from one theme to another, without jarring the mind. Many designers make the mistake of abruptly intervening an 8-piece theme, for example, when transitioning to another. A designer must never do it, unless pure theater is at the core of its audacious intent to enthrall and shock the audience. The last designer to go against the almost sacred fluid rhythm of transition is Alexander McQueen in his reptilian 2010 Spring-Summer show, where the iconic armadillo shoes were birthed.

There are the stunningly poetic pieces inspired by the art and life of symbolist Austrian painter, and probably the most famous Vienna Secession movement member, Gustav Klimt, famous for his artwork- Portrait of Adele Bloch-Bauer. Male and female models strutted the colors of Klimt’s golden phase, so-called because of the heavy use of gold leaf. Just like many of Klimt’s highly-sought paintings, the dresses and suits of Michael Cinco were reflective of the artist’s exceptional decorative works. As the artist himself proclaimed, “Probably the ultimate stage of my development of ornament.” They are stunning not just because these particular pieces could be mistaken as a faithful extension of Klimt’s idealism in the threads of fashion, but because the painter’s life to some extent uncannily resembles Michael’s: they are devoted to art, to their families, and both are highly selective.

Fashion connoisseurs gasped and rose with thunderous applause when Michael Cinco appeared to close the show. The shy demeanor is still there. This self-consciousness is what makes him an enigma to most people, unused to the idea of a world-class designer whose public persona – unassuming and unaffected by the trappings of success – contrasts against his often voluminous, crystal-studied, and breathtakingly expensive gowns. 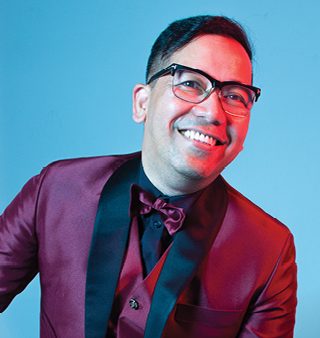 Educator, Writer and 300MIFG Honoree Dr. Rex Bacarra has received several accolades and recognitions through his work in the academic field. Known for developing his students into independent thinkers, he has also worked under prestigious institutions and has delivered several talks on leadership and innovation.Having witnessed Michael Cinco’s growth throughout the years, he brings forth a unique and personal take on the designer’s story.