Michelle Guinto – Illustrado 300 Most Influential Filipinos in the Gulf 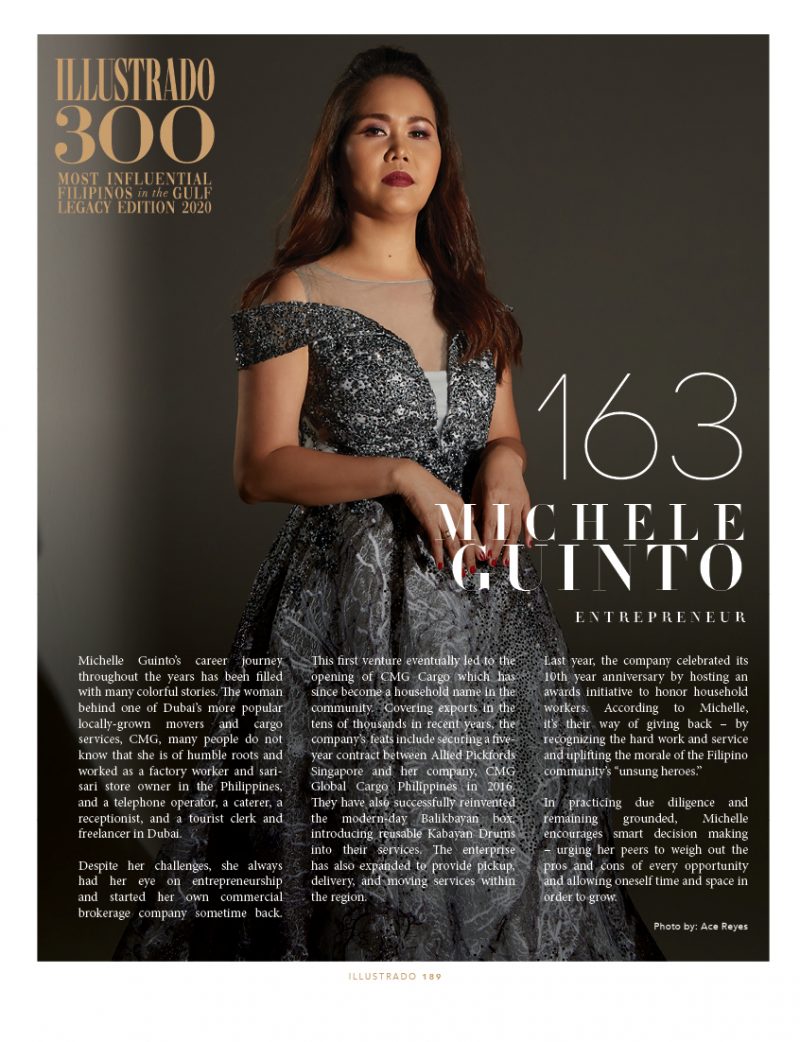 Michelle Guinto’s career journey throughout the years has been filled with many colorful stories. The woman behind one of Dubai’s more popular locally-grown movers and cargo services, CMG, many people do not know that she is of humble roots and worked as a factory worker and sari-sari store owner in the Philippines, and a telephone operator, a caterer, a receptionist, and a tourist clerk and freelancer in Dubai.

Despite her challenges, she always had her eye on entrepreneurship and started her own commercial brokerage company sometime back, that first venture eventually led to the opening of CMG Cargo which has since become a household name on the community.  Covering exports in the tens of thousands in recent years, the company’s most recent feats include securing a five-year contract between Allied Pickfords Singapore and her company, CMG Global Cargo Philippines in 2016.   They have also successfully reinvented the modern-day Balikbayan box, introducing reusable Kabayan Drums into their services. The enterprise has also expanded to provide pickup, delivery, and moving services within the region.

Last year, the company celebrated its 10th year anniversary by hosting an awards initiative to honor household workers. According to Michelle, it’s their way of giving back – by recognizing the hard work and service and uplifting the morale of the Filipino community’s “unsung heroes.”

In practicing due diligence and remaining grounded, Michelle encourages smart decision making – urging her peers to weigh out the pros and cons of every opportunity and allowing oneself time and space in order to grow.

Mariyah Gaspacho – Illustrado 300 Most Influential Filipinos in the Gulf

Trailblazer – Mariyah ‘Mahryska’ Gaspacho Content Creator & Social Media Influencer “I started my space to share a passion and love for photography and fashion simply. To inspire women to dress well, and get inspired by creating captivating images,” shares Mariyah Gaspacho, or simply known as Mahryska – a veteran content creator who, in the …

Gamechanger – Chef Earl Roland Puse Born in Paris to Bulakenyo parents and raised in London, Chef Earl Roland Puse comes from a background steeped in multicultural culinary influences. He has honed his skills at a variety of world-class restaurant brands, including the Conran (now Plateau Restaurant – Canary Wharf), La Petite Maison in London …

Ace Reyes – Illustrado 300 Most Influential Filipinos in the Gulf

Tastemaker – Ace Reyes Fashion Photographer  At a very young age, Ace Reyes has become a rising ambassador within the local fashion photography sector holding his own, side by side more established industry professionals.  A millennial photographer making his way into the industry, his playful look at things, creativity, and decisiveness, anchored to his modest …

Most Influential Filipinos in the Gulf: Sheryll Bacay – The First Lady of HR

Coming from an underprivileged childhood in the province of Batangas, Sheryll Bacay likens her rise in the corporate world to rock climbing – rough, perilous, and scary. 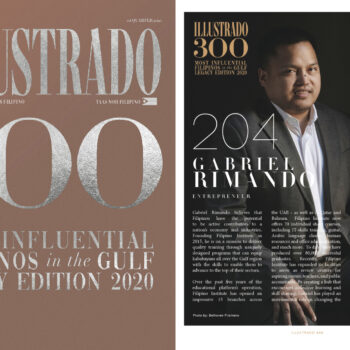 Gabriel Rimando – Illustrado 300 Most Influential Filipinos in the Gulf