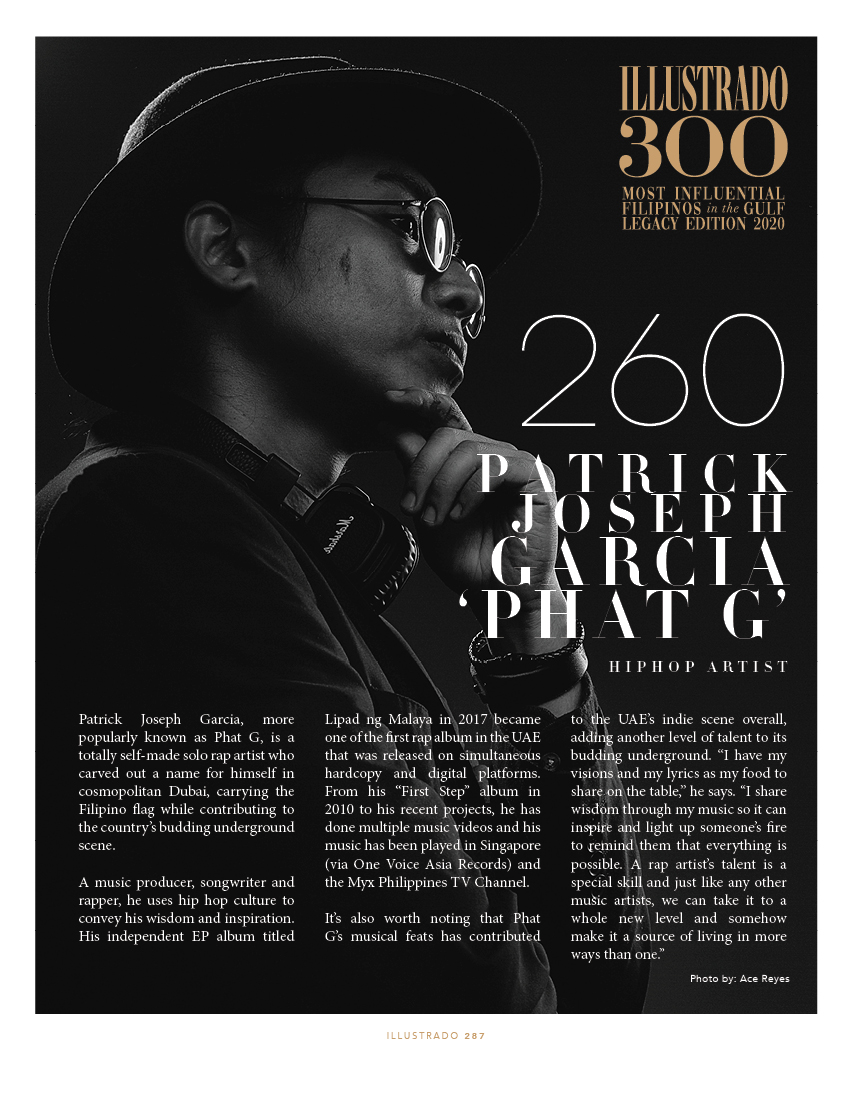 Patrick Joseph Garcia, more popularly known as Phat G, is a totally self-made solo rap artist who carved out a name for himself in cosmopolitan Dubai, carrying the Filipino flag while contributing to the country’s budding underground scene.

A music producer, songwriter and rapper, he uses hip hop culture to convey his wisdom and inspiration. His independent EP album titled Lipad ng Malaya in 2017 became one of the first rap album in the UAE that was released on simultaneous hardcopy and digital platforms. From his “First Step” album in 2010 to his recent projects, he has done multiple music videos and his music has been played in Singapore (via One Voice Asia Records) and the Myx Philippines TV Channel.

It’s also worth noting that Phat G’s musical feats has contributed to the UAE’s indie scene overall, adding another level of talent to its budding underground. “I have my visions and my lyrics as my food to share on the table,” he says. “I share wisdom through my music so it can inspire and light up someone’s fire to remind them that everything is possible. A rap artist’s talent is a special skill and just like any other music artists, we can take it to a whole new level and somehow make it a source of living in more ways than one.”

Most Influential Filipinos in the Gulf: SONIQ – Tastemaker

In the pulsating, Western culture-dominated club scene of the UAE, Soniq stands as a uniquely Filipino voice – a group of young, musically gifted DJ’s on a quest to infuse the Middle East’s audio landscape with Pinoy soul.

#taasnoofilipino Through their academic endeavors, teachers are the torchbearers of today’s society leading the young towards a bright future. In the case of trailblazing educators Dr. Rex Bernard Bacarra and Dr. Rommel Sergio Pilapil, they also contribute positive change not only to the lives of the youth but also towards the community. #illustradomagazine #100MIFG

Most Influential Filipinos in the Gulf: Capt. Frank Desiderio – Trailblazer

Capt. Frank Desiderio was all over the news when he was named the first ever Filipino to pilot the A380 bus, the biggest commercial aircraft in the world, in 2014. As the aircraft commander, he is responsible for the safety of hundred people on board in the entire duration of the flight. His career did not start well in the beginning like what most would dream of and he had to prove himself before getting the big break in 1994 – the start of his work as a flight instructor. 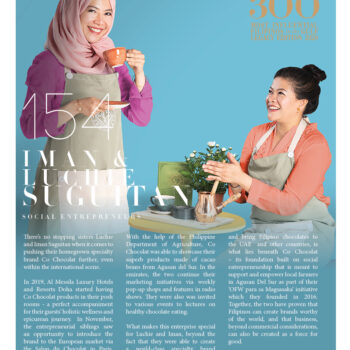 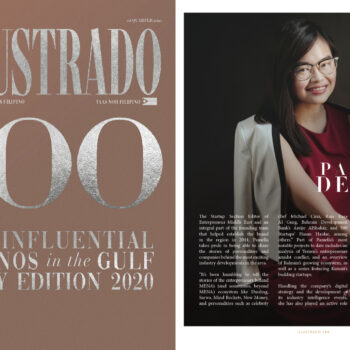 Pamela De Leon – Illustrado 300 Most Influential Filipinos in the Gulf