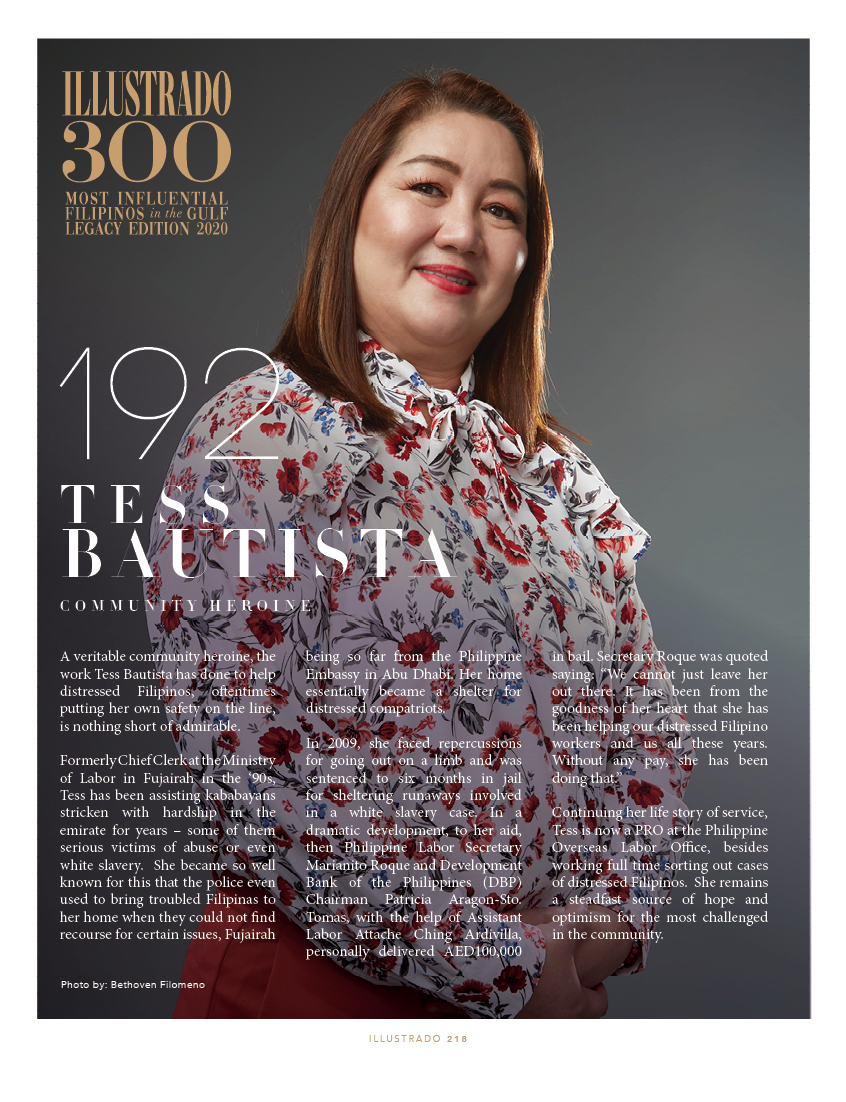 Tess Bautista – Illustrado 300 Most Influential Filipinos in the Gulf

A veritable community heroine, the work Tess Bautista has done to help distressed Filipinos, oftentimes putting her own safety on the line, is nothing short of admirable.

Formerly Chief Clerk at the Ministry of Labor in Fujairah in the ‘90s, Tess has been assisting kababayans stricken with hardship in the emirate for years – some of them serious victims of abuse or even white slavery.  She became so well known for this that the police even used to bring troubled Filipinas to her home when they could not find recourse for certain issues, Fujairah being so far from the Philippine Embassy in Abu Dhabi. Her home essentially became a shelter for distressed compatriots.

In 2009, she faced repercussions for going out on a limb and was sentenced to six months in jail for sheltering runaways involved in a white slavery case. In a dramatic development, to her aid, then Philippine Labor Secretary Marianito Roque and Development Bank of the Philippines (DBP) Chairman Patricia Aragon-Sto. Tomas, with the help of Assistant Labor Attache Ching Ardivilla, personally delivered AED100,000 in bail. Secretary Roque was quoted saying: “We cannot just leave her out there. It has been from the goodness of her heart that she has been helping our distressed Filipino workers and us all these years. Without any pay, she has been doing that.”

Continuing her life story of service, Tess is now a PRO at the Philippine Overseas Labor Office, besides working full time sorting out cases of distressed Filipinos.  She remains a steadfast source of hope and optimism for the most challenged in the community.

The Metrosapiens – Illustrado 300 Most Influential Filipinos in the Gulf

It takes a rare breed of man to actually go willingly into a warzone to facilitate the rescue of others. Charge d’ Affaires, en Pied Adelio Cruz is one of those exceptional few. He has dodged bullets, been held at gunpoint, lived in challenging conditions, while providing leadership to a Filipino community located in one of the most politically-tense environs in the region.

#taasnoofilipino Business ventures nowadays are born not only for profit and passion but also to benefit various humanitarian and environmental causes. Here two social enterprises which aim to better Filipinos through their business ventures in the UAE. #illustradomagazine #100MIFG

Of the legacy he wishes to impart amongst his kabayans, Honorable Elmer Gozun Cato says: “I would like to be remembered as the go-to person to get the job done. As someone who helped make a difference in improving the lives of our people; someone our people could run to and count on.” 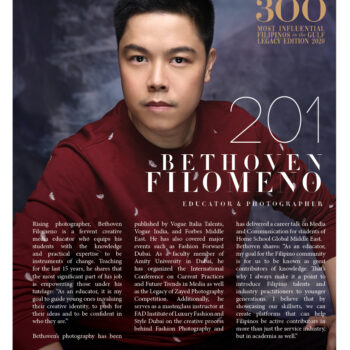 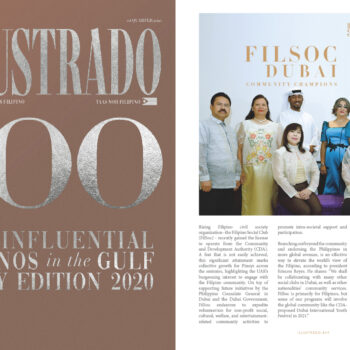 Filsoc Dubai – Illustrado 300 Most Influential Filipinos in the Gulf