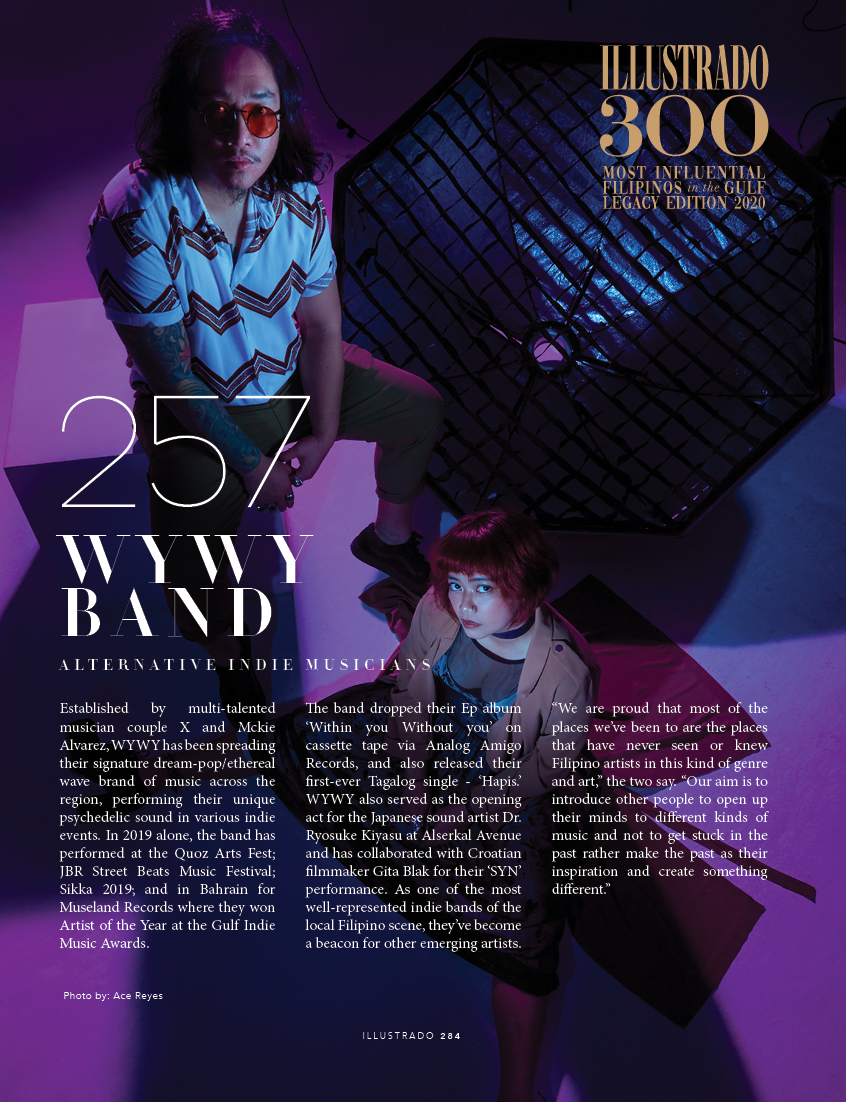 Established by multi-talented musician couple X and Mckie Alvarez, WYWY has been spreading their signature dream-pop/ethereal wave brand of music across the region, performing their unique psychedelic sound in various indie events. In 2019 alone, the band has performed at the Quoz Arts Fest; JBR Street Beats Music Festival; Sikka 2019; and in Bahrain for Museland Records where they won Artist of the Year at the Gulf Indie Music Awards.

The band dropped their Ep album ‘Within you Without you’ on cassette tape via Analog Amigo Records, and also released their first-ever Tagalog single – ‘Hapis.’ WYWY also served as the opening act for the Japanese sound artist Dr. Ryosuke Kiyasu at Alserkal Avenue and has collaborated with Croatian filmmaker Gita Blak for their ‘SYN’ performance. As one of the most well-represented indie bands of the local Filipino scene, they’ve become a beacon for other emerging artists.

“We are proud that most of the places we’ve been to are the places that have never seen or knew Filipino artists in this kind of genre and art,” the two say. “Our aim is to introduce other people to open up their minds to different kinds of music and not to get stuck in the past rather make the past as their inspiration and create something different.” 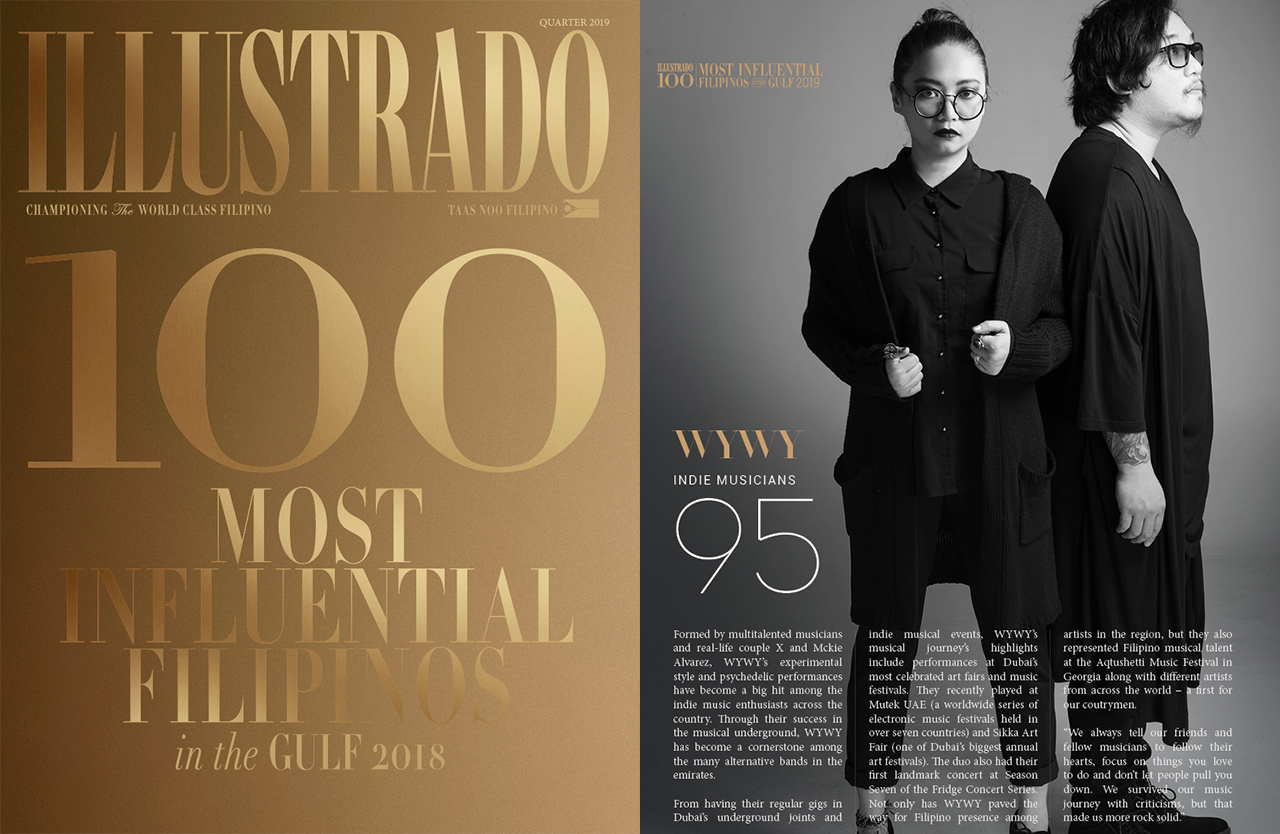 Formed by multitalented musicians and real-life couple X and Mckie Alvarez, WYWY’s experimental style and psychedelic performances have become a big hit among the indie music enthusiasts across the country. Through their success in the musical underground, WYWY has become a cornerstone among the many alternative bands in the emirates.

From having their regular gigs in Dubai’s underground joints and indie musical events, WYWY’s musical journey’s highlights include performances at Dubai’s most celebrated art fairs and music festivals. They recently played at Mutek UAE (a worldwide series of electronic music festivals held in over seven countries) and Sikka Art Fair (one of Dubai’s biggest annual art festivals). The duo also had their first landmark concert at Season Seven of the Fridge Concert Series. Not only has WYWY paved the way for Filipino presence among artists in the region, but they also represented Filipino musical talent at the Aqtushetti Music Festival in Georgia along with different artists from across the world – a first for our coutrymen.

“We always tell our friends and fellow musicians to follow their hearts, focus on things you love to do and don’t let people pull you down. We survived our music journey with criticisms, but that made us more rock solid.”

Most Influential Filipinos in the Gulf – Ambassador Narciso Castaneda – Oman

When His Excellency Ambassador Narciso Castaneda took the position as Head of Post at the Philippine Embassy in Oman, his objectives include enhancing the cordial relations between the Philippines and Oman based on the three pillars of Philippine Foreign Policy…

Dawn Almario – Illustrado 300 Most Influential Filipinos in the Gulf

Jevily Florida Painagan – Illustrado 300 Most Influential Filipinos in the Gulf

Thoughtleader – Jevily Florida Painagan Entrepreneur & Fitness Professional Entrepreneur Jevily Florida Painagan of events management company Florida Entertainment, is most prominent for being a yoga ambassador to the fitness community whose work in recent years, had been devoted to spreading health awareness to a greater audience. Jevily has been active in organizing the Dubai …

Anthony El Estwani – Illustrado 300 Most Influential Filipinos in the Gulf 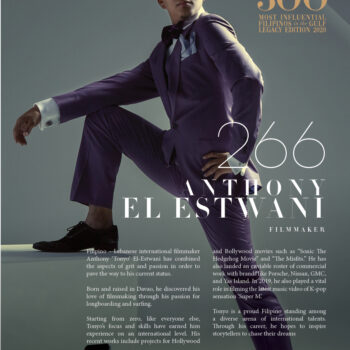 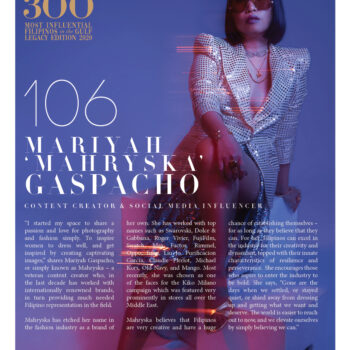 Mariyah Gaspacho – Illustrado 300 Most Influential Filipinos in the Gulf