Yen AB - Illustrado 300 Most Influential Filipinos in the Gulf 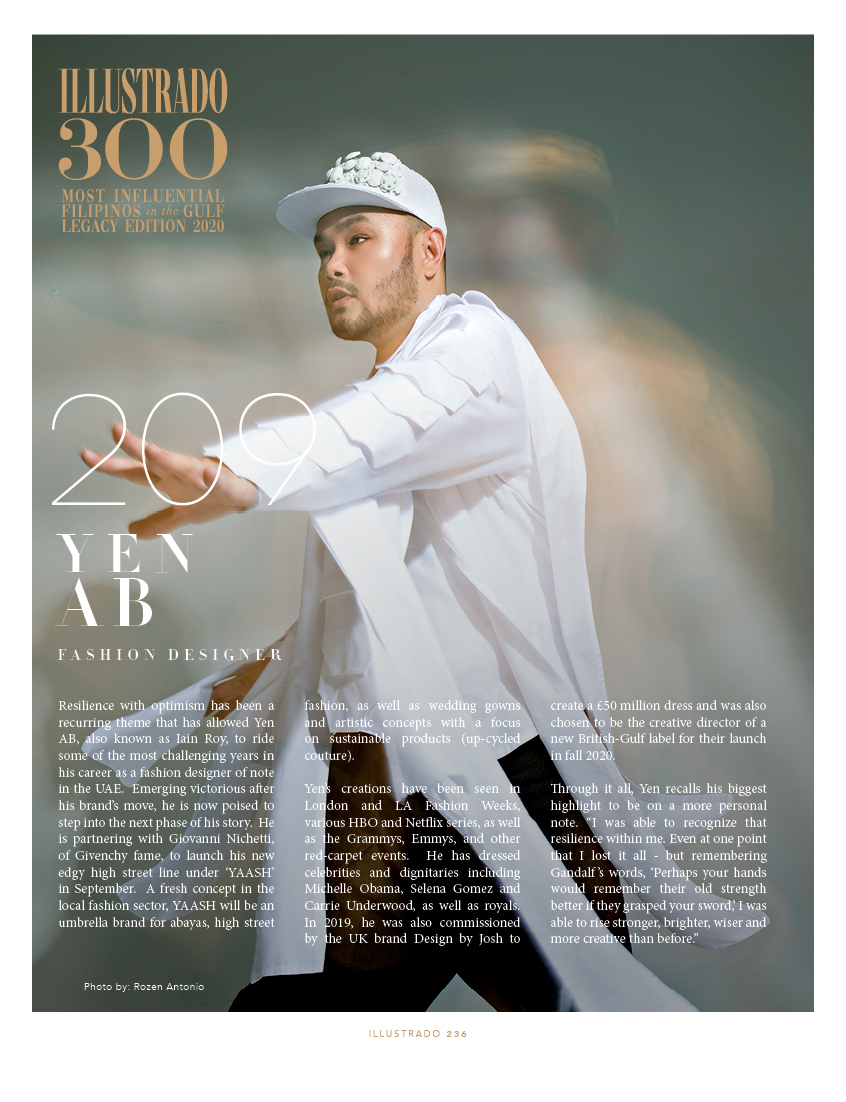 Yen AB – Illustrado 300 Most Influential Filipinos in the Gulf

Resilience with optimism has been a recurring theme that has allowed Yen AB, also known as Iain Roy, to ride some of the most challenging years in his career as a fashion designer of note in the UAE.  Emerging victorious after his brand’s move, he is now poised to step into the next phase of his story.  He is partnering with Giovanni Nichetti, of Givenchy fame, to launch his new edgy high street line under ‘YAASH’ in September.  A fresh concept in the local fashion sector, YAASH will be an umbrella brand for abayas, high street fashion, as well as wedding gowns and artistic concepts with a focus on sustainable products (up-cycled couture).

Yen’s creations have been seen in London and LA Fashion Weeks, various HBO and Netflix series, as well as the Grammys, Emmys, and other red-carpet events.  He has dressed celebrities and dignitaries including Michelle Obama, Selena Gomez and Carrie Underwood, as well as royals. In 2019, he was also commissioned by the UK brand Design by Josh to create a £50 million dress and was also chosen to be the creative director of a new British-Gulf label for their launch in fall 2020.

Through it all, Yen recalls his biggest highlight to be on a more personal note. “I was able to recognize that resilience within me. Even at one point that I lost it all – but remembering Gandalf’s words, ‘Perhaps your hands would remember their old strength better if they grasped your sword,’ I was able to rise stronger, brighter, wiser and more creative than before.” 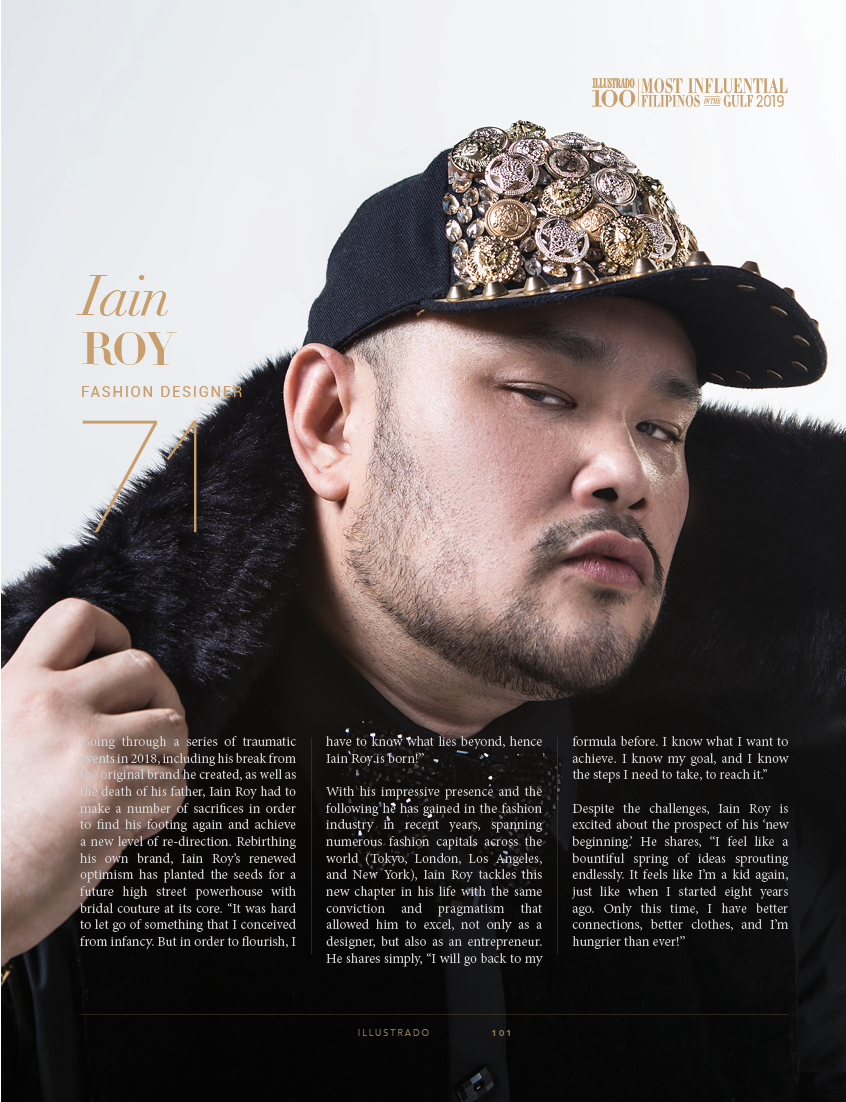 Going through a series of traumatic events in 2018, including his break from the original brand he created, as well as the death of his father, Iain Roy had to make a number of sacrifices in order to find his footing again and achieve a new level of re-direction. Rebirthing his own brand, Iain Roy’s renewed optimism has planted the seeds for a future high street powerhouse with bridal couture at its core. “It was hard to let go of something that I conceived from infancy. But in order to flourish, I have to know what lies beyond, hence Iain Roy is born!”

With his impressive presence and the following he has gained in the fashion industry in recent years, spanning numerous fashion capitals across the world (Tokyo, London, Los Angeles, and New York), Iain Roy tackles this new chapter in his life with the same conviction and pragmatism that allowed him to excel, not only as a designer, but also as an entrepreneur.  He shares simply, “I will go back to my formula before. I know what I want to achieve. I know my goal, and I know the steps I need to take, to reach it.”

Despite the challenges, Iain Roy is excited about the prospect of his ‘new beginning.’ He shares, “I feel like a bountiful spring of ideas sprouting endlessly. It feels like I’m a kid again, just like when I started eight years ago. Only this time, I have better connections, better clothes, and I’m hungrier than ever!” 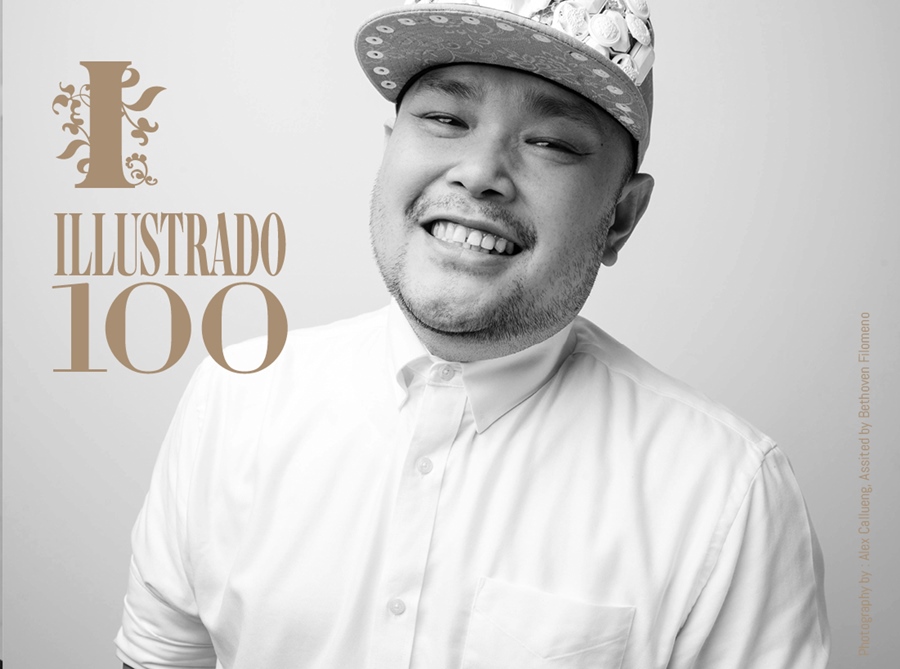 Yen is proud Filipino couturier/businessman and the co founder of Yen Fashion Design – a bridal and couture atelier based in Abu Dhabi which has branches in Doha, Los Angeles, London and Tokyo. The brand also retails in House of Fraser and Bloomingdales.

Yen’s works have circulated around the fashion capitals of the world and have been noticed by world’s premiere international glossies. Revealing his “trick of the trade,” Yen says that the biggest and the most important investment he has made is in hiring a reliable staff. He adds that the key to “yenify” results is working smart not working hard. He shares: “My philosophy is ”Always pushing forward.” If there is an unforeseen error – instead of pointing fingers, let’s think of a solution and move forward. If we achieved our goals – let’s think of a way to be even better at it. And in times of stress – chill, evaluate and move forward with the solution. I have no time to dilly-dally and apply Heisenberg’s Uncertainty Principle in every obstacle.”

Ever the intellectual, Yen is currently formulating “The Yen Method” – a principle of entrepreneurship that, he says, can propel anyone into achieving their goals and unlock any enterprise’s full potential.

Filsoc Dubai – Illustrado 300 Most Influential Filipinos in the Gulf

Having accomplished scores of noteworthy milestones and bagged various medals in the world of athletics, Charles Marelid continues to make his mark and carve out a name for himself as one of the youngest, most esteemed short distance sprinters in the U.A.E.

#taasnoofilipino In case you haven’t heard, fashion/lifestyle blogging version 1.0 is now so 2000. Yesterday’s market of #OOTDs and #selfies has been replaced by a wider scope of interests which includes lifestyle, travel, even fitness. Style bloggers have rebranded themselves as online influencers, masters of flatlays, and wanderlust-consumed adventurers whom you can stalk with just a click on the follow button. Here are the most influential Filipinos in the local and regional blogosphere. #illustradomagazine #100MIFG

Commercial Attaché Charmaine Yalong – 300 Most Influential Filipinos in the Gulf 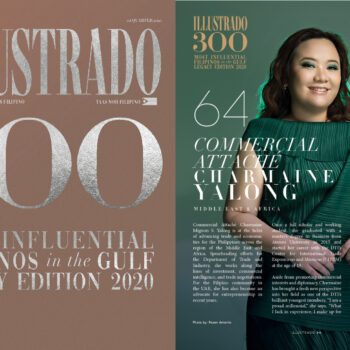 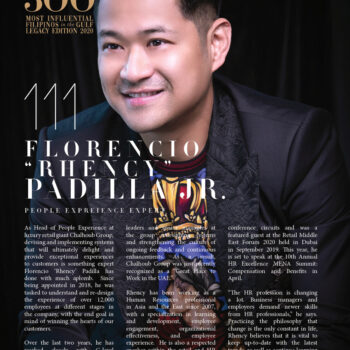 Florencio Padilla Jr – Illustrado 300 Most Influential Filipinos in the Gulf