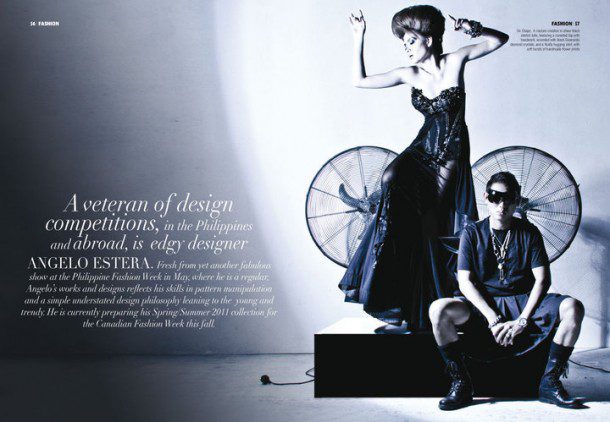 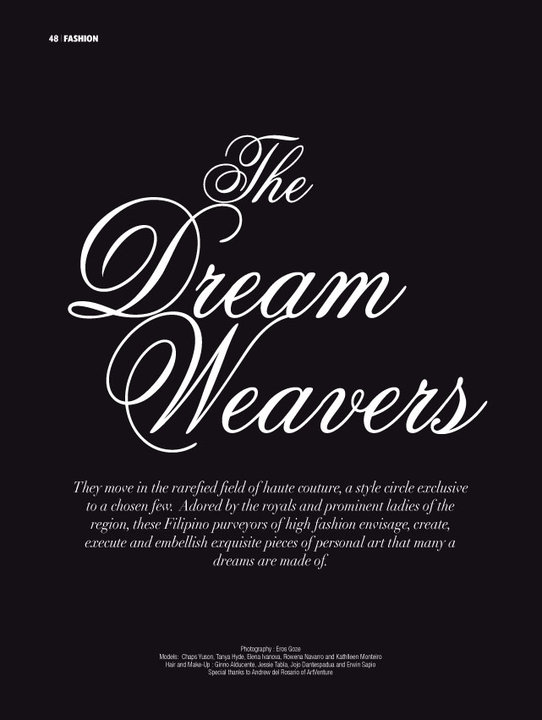 Photography: Eros Goze Hair and Make-Up:   Ginno Alducente, Jessie Tabla, Jojo Padua Models: Chaps Yuson, Tanya Hyde, Elena Ivanova, Rowena Navarro and Kathleen Monteiro Special thanks to Andrew Soriano   They move in the rarefied field of haute couture, a style circle exclusive to a chosen few.  Adored by the royals and prominent ladies of the region, these Filipino purveyors of high fashion envisage, create, execute and embellish exquisite pieces of personal art that many a dreams are made of.      EZRA SANTOS The divine, the ‘Imeldific’ Ezra Santos – style createur of the highest order, is known for his impeccable taste and exquisitely beautiful designs. His luxurious pieces which carry a distinct sense of muted aesthetics are worn by an enviable list of royals and prominent ladies in the Gulf. Last year, in his maiden gala show, “In the Beginning” Ezra showcased the revolutionized “butterfly sleeves,” the iconic Filipino style element, initiating a bold and credible trend with a sophisticated and edgy global appeal, beyond Philippine borders. 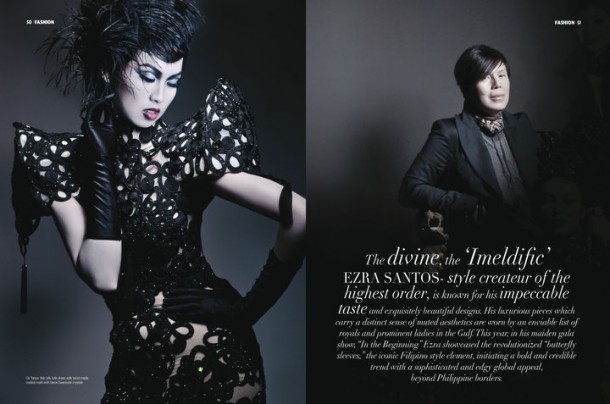 On Tanya: Noir silk tulle dress with hand-made corded motif with black Swarovski crystals   REYNALDO GONZAGA Of royal designing lineage, Reynaldo Gonzaga has spun dreamy creations for the ruling family of Dubai since the late 80s to early 2000. Currently heading the creative department of Scalini Haute Couture a prime fashion house in Jumeirah Dubai, Reynaldo has gone a long way from his first atelier in Chinatown in 1980, working his way into the exclusive coterie of the region’s haute couture mavericks from Saudi Arabia to the emirates, with his exquisitely beautiful and ultra feminine designs. 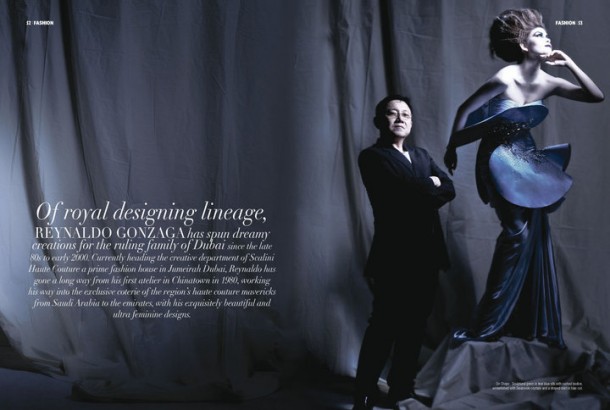 On Chaps:  Sculptural gown in teal blue silk with ruched bodice, embellished with Swarovski crystals and a draped skirt in bias cut.    ALBERT ANDRADA The ruling family of Fujairah’s Royal Designer Albert Alba was born to design for royalty. His eclectic childhood spent in different cities around the globe, not to mention his constant travels, has shaped his love affair with fashion.  Previously one of Issetan’s Board of Designers, member of the Fashion Designers Association of the Philppines, and Chief Creative Director in Sayidat al-Aziya, one of KSA’s most prestigious fashion houses, Albert now heads a team of 30 with three seasoned designers beside him, in the palace’s atelier where he has the best of materials and skills to work with.  Albert is not only a royal designer, but is, in fact, royally loved by the community of Filipino designers in the emirates who regard him as a dear friend and natural leader. 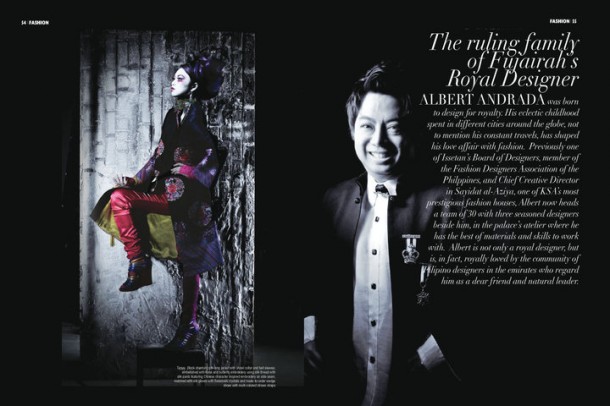 Tanya:  Black shantung silk long jacket with shawl collar and bell sleeves, embellished with floral and butterfly embroidery using silk thread with silk pants featuring Chinese character inspired embroidery on side seam, matched with silk gloves with Swarovski crystals and made-to-order wedge shoes with multi-colored straws straps    RUBEN SANTOS Ruben Santos’ creations are much like poetry – timeless and elegant with a decidedly edgy twist.  The renowned couturier from the UAE capital Abu Dhabi, designer Ruben of Queen Palace Fashion is adored by a high end clientele for his sophisticated and one-of-a-kind pieces that spell art and glamor in one richly embellished package. 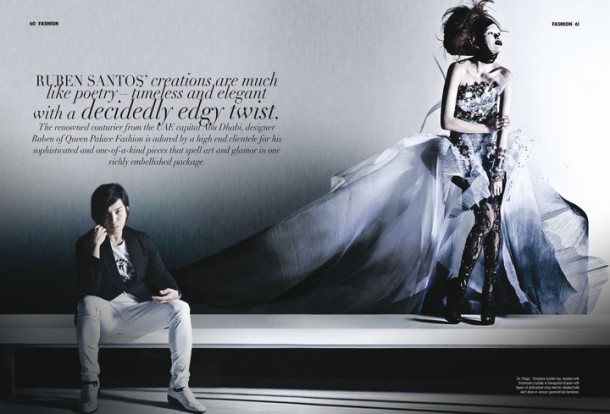 On Chaps:  Strapless bustier top, beaded with Swarovski crystals in hexagonal shapes with layers of airbrushed crisp electric pleated tulle skirt done in uneven geometrical hemlines.   ALDWIN ORNOPIA GUARDIANA Romance, femininity and magic – are the hallmarks of designer’s Aldwin Ornopia Guardiana’s work.  Particularly interested in life, events, and the environment which stimulate his imagination, Aldwin who designs for Art Fashion in Abu Dhabi, draws from the world around him to create pieces that are a definitive expression of femininity and an interpretation of romanticism. 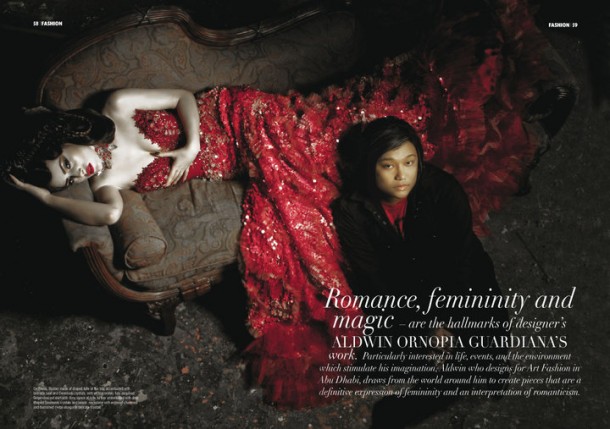 On Elena:  Bustier made of draped tulle at the top, accentuated with brocade lace and Swarovski crystals, with an elaborately fully sequined Serpentina cut skirt with filmy layers of tulle further embellished with drop shaped Swarovski crystals and beads; neckpiece with exposed chainmail and burnished metal alongside delicate crystals ANGELO ESTERA A veteran of design competitions, in the Philippines and abroad, is edgy designer Angelo Estera.  Fresh from yet another fabulous show at the Philippine Fashion Week in May, where he is a regular, Angelo’s works and designs reflects his skills in pattern manipulation and a simple understated design philosophy leaning to the  young and trendy. 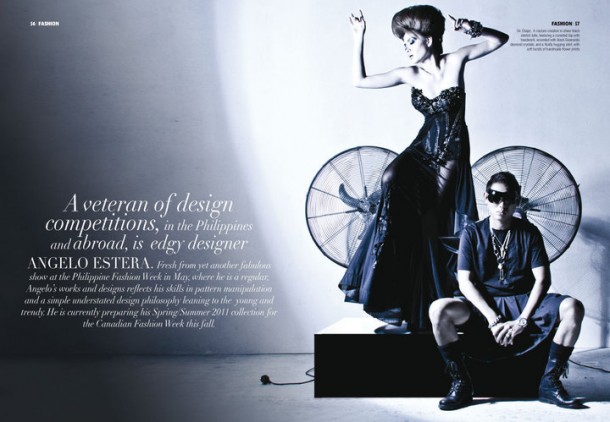 On Chaps:  A couture creation in sheer black stretch tulle, featuring a corseted top with handwork, accented with black Swarovski diamond crystals, and a fluidly hugging skirt, with soft bursts of handmade flower prints.   ROCKY GATHERCOLE Scene stealer and enfant terrible, controversial Rocky Gathercole is a designer whose clothes are undoubtedly talking pieces.  Whether inspired by insects, or some otherworldly futuristic forms, Rocky’s creations never fail to raise eyebrows.  The ebullient designer is known for consistently pushing the boundaries of design whether through unusual embellishments or cut work or the use of tantalizingly risqué cuts and materials.  His designs are always very sensual, and command bravado from the women who wear them. 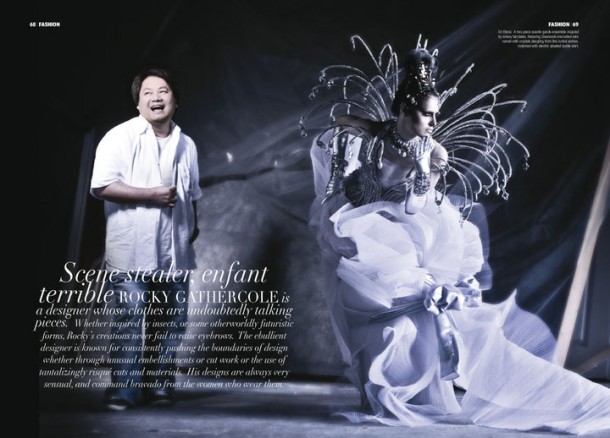 On Elena:  A two piece avante-garde ensemble inspired by snowy fairytales, featuring Swarovski encrusted wire corset with crystals dangling from the curled arches, matched with electric pleated bustle skirt.   JIMI BUENCONSEJO Feeding the fantasies of the woman who wears it is the raison détre of each Jimi Buenconsejo piece.  Unashamedly partial to the womanly silhouette, Jimi’s self-assured designs are very much skewed to the soft, flirty and alluring. A former member of the Board of Designers for Isetann, before he ventured to the Middle East to explore couture, where he has been designing for the last 18 years. 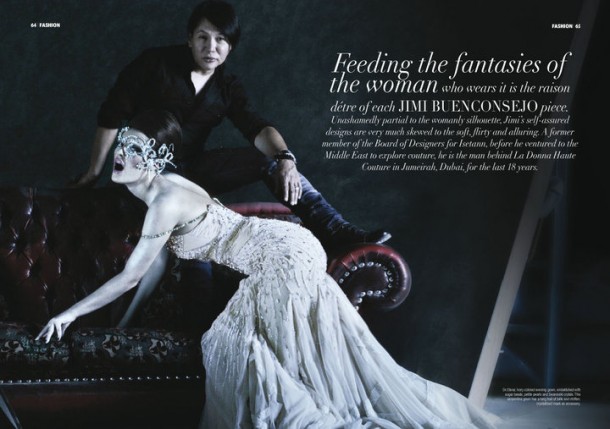 On Elena: Ivory colored evening gown, embellished with sugar beads, petite pearls and Swarovski crytals. This serpentina gown has a long trail of tulle and chiffon; crystallized mask as accessory.   ROD BALINGIT Joie de vivre is indelibly reflected in designer Rod Balingit’s works.  Rod who owns Gharasheeb in Dubai, stumbled into the world of fashion through designing costumes for dancing, has an irrepressible passion for life which spills through his works that are oftentimes playful and whimsical.  His style is for the woman comfortable in her own skin, confidently in celebrating her feminine wiles. 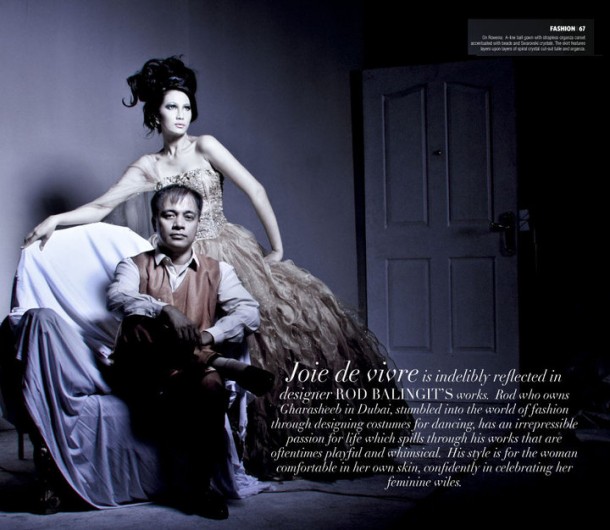 On Rowena:  A-line ball gown with strapless organza corset accentuated with beads and Swarovski crystals. The skirt features layers upon layers of spiral crystal cut-out tulle and organza. ROMMEL MA. TUMULAK Rommel Ma. Tumulak derives his style inspirations from the rich Arabesque design elements of the region.  An artist before he became a fashion designer based in Abu Dhabi for almost two decades now, Mel’s style leanings are based on Arabic influences which he blends with current trends and his own personal flair; thus, his love for intricate detail, beadwork and embroidery. 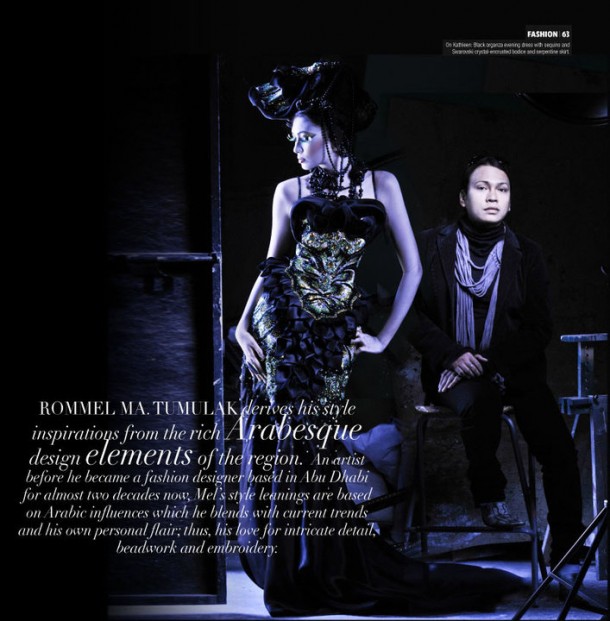 On Kathleen: Black organza evening dress with sequins and Swarovski crystal-encrusted bodice and serpentine skirt.   RALPH RAMIREZ Designer Ralph Ramirez says “respect for the female form” defines his approach to design.And that’s one of the main things why his well-heeled patrons love his works.  Ralph originally studied architecture but fell in love with fashion and eventually decided to pursue a career haute couture.  Over two decades hence, Ralph continues to dream up and design beautiful pieces in his own atelier Lafana Haute Couture, based in Sharjah. 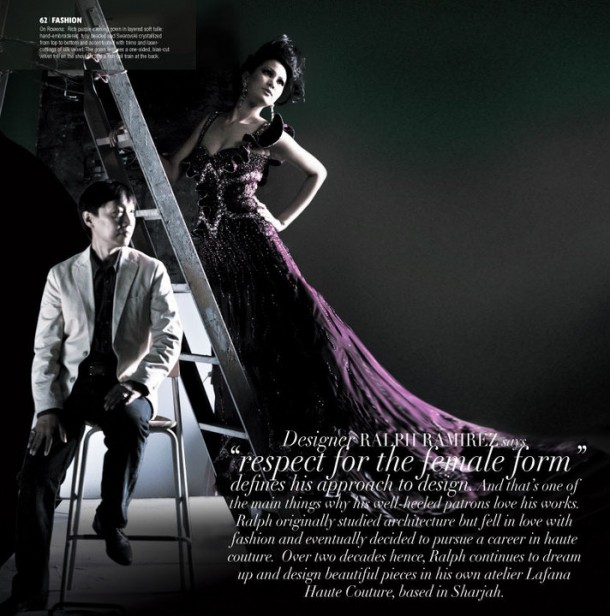 On Rowena:  Rich purple evening gown in layered soft tulle: hand-embroidered, fully beaded and Swarovski crystallized from top to bottom and accentuated with trims and laser-cuttings of silk velvet. The gown features a one-sided, bias-cut velvet frill on the shoulder and a fish-tail train at the back.    HENRY MANGAHAS With refinement and glamor always in mind, Henry Mangahas’ designs focus mostly on soft fluid lines. His creations always carry alluring silhouettes, sometimes adorned with embroidery and appliqués, meant to please women of all ages.  Henry, who manages and designs for La Reina in Jumeirah Dubai, believes that individuality and the artistic sense of every woman, makes for the perfect combination to come out with a perfect creation. 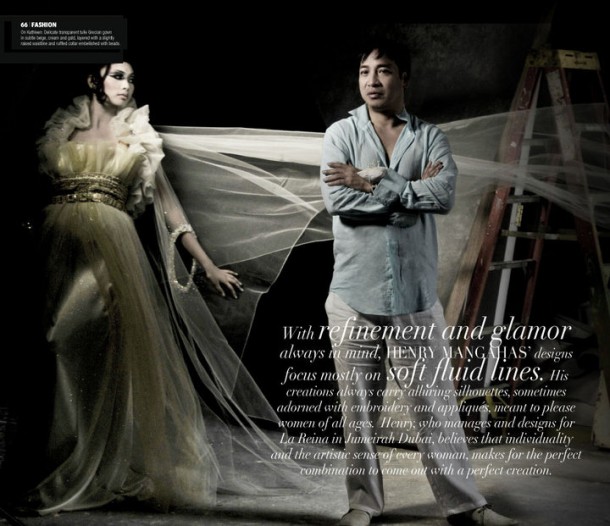 Michael Cinco: Of Million Peso Dresses and the Impalpable Dream

If there’s anybody who should be credited for bringing in much-deserved attention to UAE-based Filipino designers within the unforgiving and sharply-taloned fashion industry in the Philippines, it is Michael Cinco. The celebrated designer has undoubtedly ignited megawatt interest with the voracious media, style and celeb circle in the country.

But is there something beyond the drama on Philippine Fashion Week runway, the covers in Manila glossies, TV and red carpet couture moments with the Manila stars du jour?

A closer look reveals that there is more to La Cinco than the hype and the million peso dress.