Hyku Desesto - Illustrado 300 Most Influential Filipinos in the Gulf 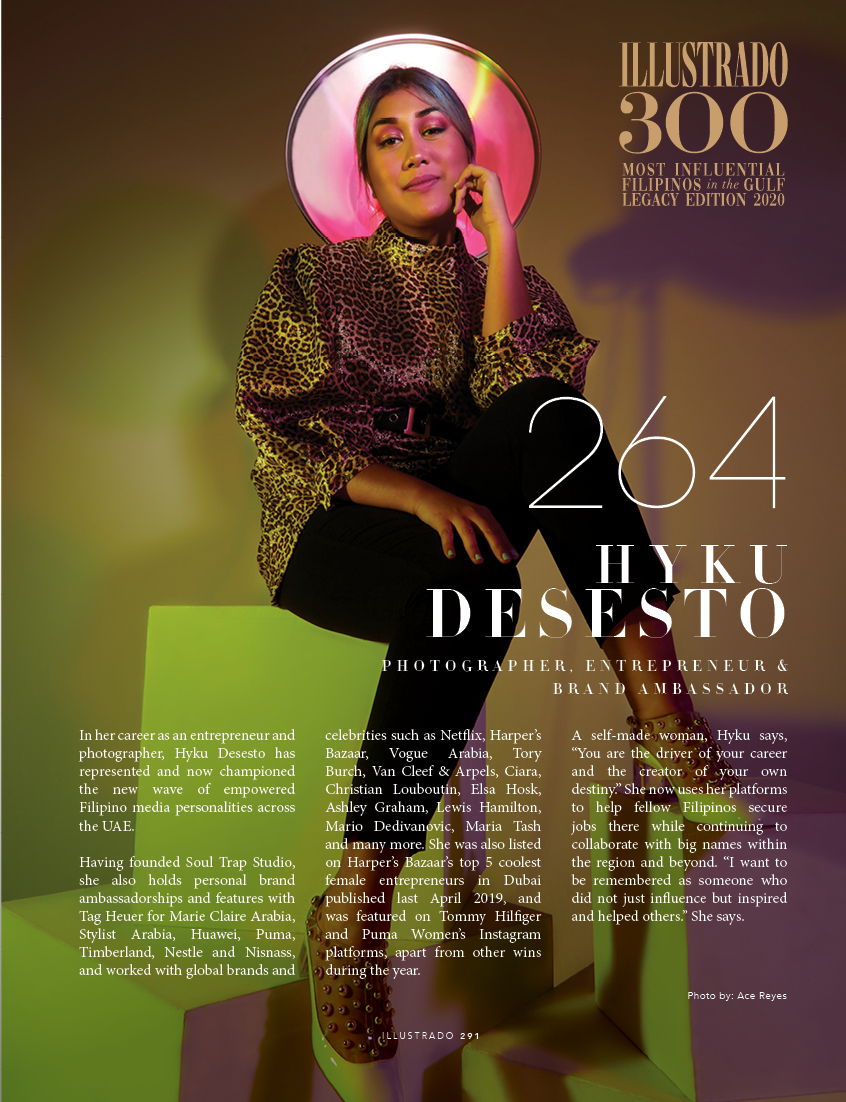 In her career as an entrepreneur and photographer, Hyku Desesto has represented and now championed the new wave of empowered Filipino media personalities across the UAE.

A self-made woman, Hyku says, “You are the driver of your career and the creator of your own destiny.” She now uses her platforms to help fellow Filipinos secure jobs there while continuing to collaborate with big names within the region and beyond. “I want to be remembered as someone who did not just influence but inspired and helped others.” She says.

Two thousand eighteen has been a monumental year for photographer turned entrepreneur Hyku Desesto. She has brought some collaborations to life, executing creative direction for luxury and fashion brands and delivering a new level of Filipino presence to international marketing campaigns in the region. 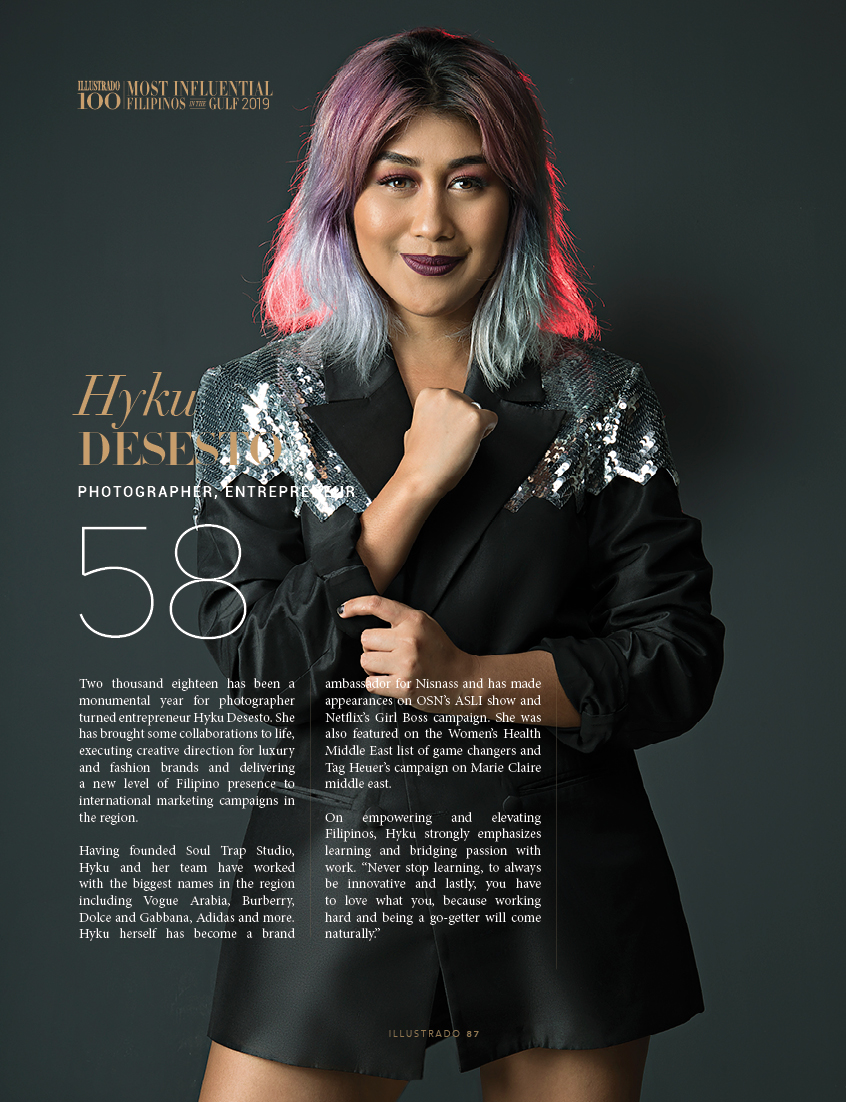 Having founded Soul Trap Studio, Hyku and her team have worked with the biggest names in the region including Vogue Arabia, Burberry, Dolce and Gabbana, Adidas and more. Hyku herself has become a brand ambassador for Nisnass and has made appearances on OSN’s ASLI show and Netflix’s Girl Boss campaign. She was also featured on the Women’s Health Middle East list of game changers and Tag Heuer’s campaign on Marie Claire middle east.

On empowering and elevating Filipinos, Hyku strongly emphasizes learning and bridging passion with work. “Never stop learning, to always be innovative and lastly, you have to love what you, because working hard and being a go-getter will come naturally.” 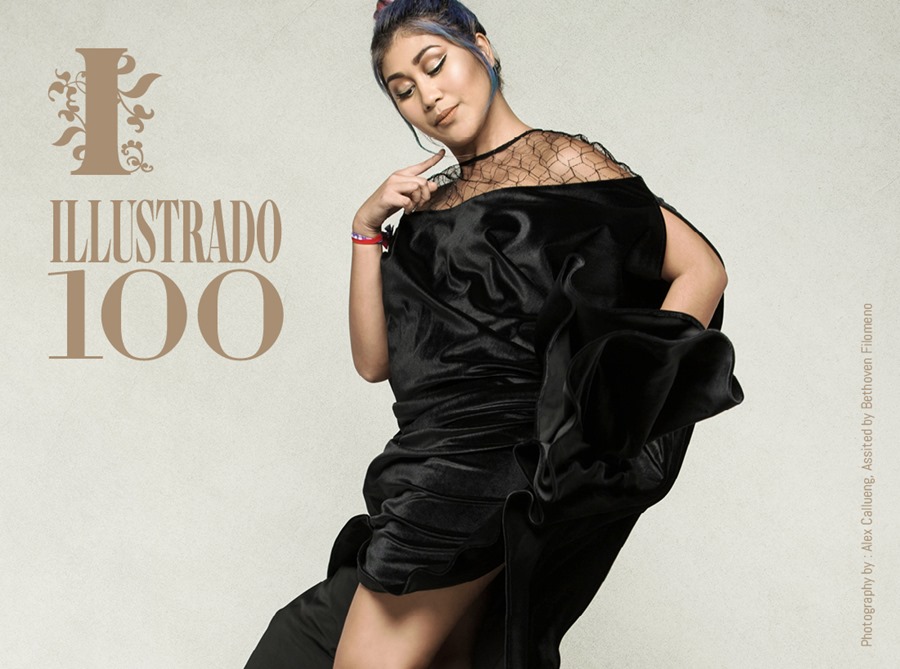 Hyku arrived in Dubai with practically zero connections in the photography industry. She started of what has turned out to be a remarkable career by working in a portrait studio. Eventually, she decided to pursue freelance photography, armed with just one camera body, a flash and two lenses. And by virtue of her hard work, sleepless nights, and ability to market her work, she was able to nurture her career and launch her own company: Hyku D Photography.

With a strong track record of success that spans 4 years, Hyku decided to expand her business in 2016 by setting up an office and hiring full time employees, with the objective of attracting larger, more multinational clients.  As a result of this expansion, Hyku’s company was chosen as the official photographer of the recent Tommy Hilfiger ad campaign, featuring a-list model Gigi Hadid. Additionally, Hyku was also elected as the brand ambassador for companies Huawei and Timberland.

Of her struggles and hustles as a photographer, Hyku elaborates: “The biggest lesson that I learned is no one else can make it happen for you but yourself. Be a go getter. Do whatever it takes and never settle. Be ambitious without stepping on other people’s toes. And always give back.”

Trailblazer – Jethroefel Ramboyong  Community Champion   An advocate for Filipino engineers in the region, Jethroefel Ramboyong is a great example of how much one man can help uplift the lives of many others. Jethroefel initiated the formation of the Filipino Communications Engineers Association (FECEA) in 2008 – a group that has become vital in …

Rising Marketing Stars – Most Influential Filipinos in the Gulf 2018

Rising Marketing Stars Behind some of the region’s most prominent initiatives on the social media scene are young and brilliant Filipinos in the driving seat.     Geny Villareal Baluyot While she is mostly known for her bold, moody Instagram photography and involvement in the #shotoniphone6s ‘Colors’ campaign, Geny Villareal Baluyot (aka Genyvb) is, in …

Melon Quinzon Perez – Illustrado 300 Most Influential Filipinos in the Gulf

Tastemaker: Melon Quinzon Perez Filmmaker  Filipina filmmaker Melon Quinzon Peres’ passion for storytelling has led to creating wonderful tales for the people whose lives she has touched. Through her grit and determination as a thriving photographer and videographer, she established her own venture MelRish Studio ten years ago, with her husband Arish Perez.  Starting out … 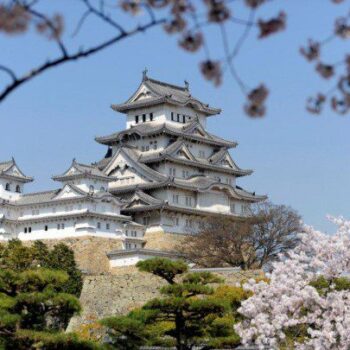 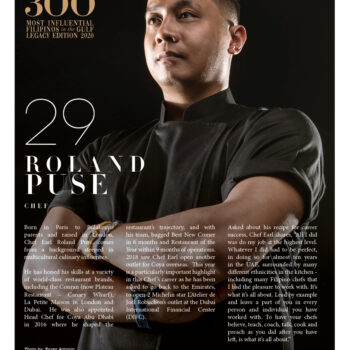