Whether they’re strutting down the street in cooler climes or keeping cool in the region’s sweltering heat, these Filipino fashionistas know how to keep their swagger – anywhere and everywhere.  Take a look at our best style picks this week from Filipino style bloggers from around the world.

2019’s edition of Fashion Forward ended up in a massive success, garnering an audience of designers, fashionistas, buyers and influencers from across the globe! This year, a handful of the region’s most well known Filipino designers took to the stage and captivated the audiences with their fantastical designs and technical mastery. Featuring the works of …

If there is one designer in the region who has utilized and championed Filipino design aesthetics to great effect, it is the divine Ezra Santos. His offering at Fashion Forward’s October 2016 edition with the haute couture reincarnation of the humble ‘banig’ as ‘piece de resistance’ was not only a feat in fashion design and fabrication, but also a triumph of indigenous Filipino artistic sense re-interpreted for the world.

Most Influential Filipinos in the Gulf: Furne One – Trailblazer

Head over to the fabulous Dubai Design District and you will be pleased to note that one of the most prominent fashion spaces is owned and headed by a Filipino – the “One and Only” Furne One, he of the Dubai fashion rock star stature, whose dramatic haute couture extravaganzas are the hottest tickets come fashion season in the city of bling. 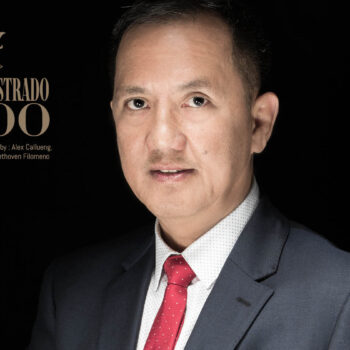