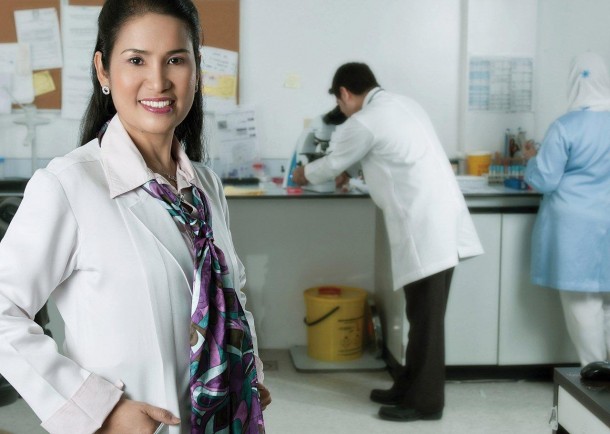 There are events in life that mark one’s character. For some it is a time of crisis, for others it is a time of great opportunity. For nurse Mary Jane Tupas, it was the prospect of a baby being born in an airplane and the ironic life and death situation that came with it that marked her innate nature to help others.

She has a handful of accomplishments to her name, yet Mary Jane Tupas, refuses to take all the credit.

“It’s not just me,” she said. “It’s every person out there, big or small, in high or low places, who take time out to help other people.”

Indeed, helping others seems to be second nature to Mary Jane, a quality instilled in her by her parents, especially her very religious father. “Even when I was still young, my father made sure that I prayed before I went out of the house,” Mary Jane related. In this way, Mary Jane stated, her father taught her to stay close to God at all times, whether struggling with difficulties or in the midst of blessings. “My father also taught me to always do only what is good. People may not recognize the good things that one does, but God certainly sees.”

These must have been the words that rang in Mary Jane’s ears during a flight to the Philippines, when a pregnant passenger suddenly went into labor. When the pilot announced the need for a medical professional, Mary Jane promptly volunteered herself. She adeptly examined the woman, recognizing right away that she needed IV fluids, as the woman was bleeding profusely. Unfortunately, save from some medicines, the plane had no other medical paraphernalia onboard.

“I told the pilot that we needed to make an emergency landing. We were over India at that time,” Mary Jane said. The pilot wanted to try to land, not in India, but in Thailand, which was approximately three hours away. “I told the pilot that the woman needed medical help right away and that waiting a few more hours would put her and her baby in jeopardy,” Mary Jane explained.

The plane landed in India, where the woman was met by an ambulance and a medical team. Meanwhile, the rest of the passengers, including Mary Jane, had to stay overnight in India. While most commended Mary Jane’s deed, some were irritated by the inconvenience of an unplanned stay in India. “It, after all, took time away from their holidays, so I understand them,” she said. “But I told them that I couldn’t just let the woman and her baby suffer, knowing that I could do something about it.”

How could someone be so selfless and always ready to help? “It’s my passion. I do it in my daily life and in my work.” Mary Grace is currently the head of the Nursing Department of Mohammad Dossary Hospital in Al Khobar, Saudi Arabia, a reputable medical center that employs highly-qualified staff. It is a job that is fitting for someone of Mary Jane’s character, because it entails responsibilities that extend beyond work hours. “Sometimes, I would be ready to sleep when I would get a call from the hospital or someone else. They need my help so I go,” Mary Jane explained.

Mary Jane is also the President of the OFW 5th Congress as well as the Ro Aklanon Saudi Arabia (an organization of Filipino from Aklan), both of which, under her leadership have spearheaded several public service initiatives including a seminar on “Tamang Pakikitungo sa Kapwa Manggagawa.”

Her consistent acts of service earned Mary Jane the Blas F. Ople Award para sa Natatanging Bagong Bayani in 2007, which recognizes OFs who foster goodwill among different peoples in the world, promote the image of the Philippines and contribute to the socio-economic development of their communities and the country.

Despite this accolade, Mary Jane is hard put to amass all the praises. In fact, the award has inspired her to do even more. “All that I am now, I owe to the community. In turn, I owe it to the community to help those who need me,” Mary Jane said.

For those who are starting to feel a passion to help others and make life better for them, Mary Jane has these words of advice: “Do your best to love your neighbor, whether they are good to you or not. Don’t expect anything in return.”

Mary Jane also has a lot of faith in the Filipino women, and she has this message for them: “We are all talented and smart in our own ways. So, do your best in everything that you do, whether as a mother, as a housewife, as an employee. Never let your gender get in the way. Just do what is good always, fear God and persevere. Everything else will be easy.”

If You Could Upgrade or Evolve on Thing in Your Life

If you could upgrade or evolve one thing in your life right now, what would it be and why? We asked some of our young and brilliant kababayans and here’s what they have to say.

Game Changer: Miguel Syjuco Author & Democracy Advocate  With a slew of prominent enemies, haters and bashers on social media, Miguel Syjuco is without a doubt a notorious thought leader among Filipinos. Despite the numerous public opinions and rumors about him in the end, he is an activist with a unique story that has challenged …

With the current global political climate, we’ve seen a lot more incidences of people acting as figures of hate and backward mentality. Racism is one of today’s biggest dilemmas, affecting everyone on a whole. So how do we Filipinos fit into this? Are we victims? Or are we perpetrators? #illustradomagazine #taasnoofilipino

Divining Digong: Dutertenomics in the Time of Brexit

Divining Digong: Dutertenomics in the time of Brexit. We take a look at how the new Philippine President Duterte’s socio-economic policies are expected to shape up. “In this time of Brexit and anti-elitism, the work is cut out for the new government to make poor Filipinos truly experience inclusive growth.” By J. Albert Araneta Gamboa