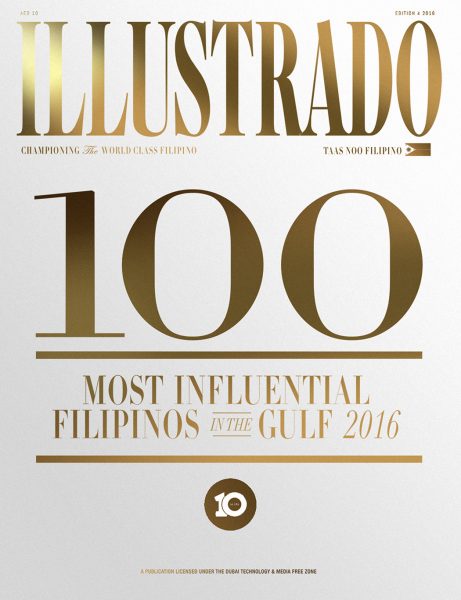 ILLUSTRADO Magazine 100 Most Influential Filipinos in The Gulf

In continued pursuit of our advocacy towards championing the image of Filipinos abroad, which started 10 years ago, we are proud to release the list of the 100 Most Influential Filipinos in the Gulf (MIFG) for the second consecutive year.

Since our launch in 2006, #TeamIllustrado has been shining the light on Filipino excellence by providing a platform for cultivating and celebrating the talent and spirit of entrepreneurs, professionals, writers, artists, designers, and content creators in the Middle East and beyond. Lalaine Chu-Benitez,  our Editor-in-Chief, shares: “The reason why we are so proud of Illustrado is because in addition to producing appealing and relevant content, we are in a unique position to see the impact that our fellow Filipinos make in their respective fields and  recognize them all in one place. Sharing their stories gives us a sense of pride, and we hope to extend that feeling to our readers. We want to continue feeding the aspirations of our community – making sure that our ‘kababayans’ understand our innate potential, our uniqueness and our ability to stand out in the cut-throat global arena.”

First published in 2015 on the occasion of the magazine’s 100th issue, Illustrado’s 100 MIFG is a special edition devoted to the brightest, most influential and most successful Filipinos in the Gulf region. Each very special and exceptional in their own craft, these 100 Filipinos are recognized for their tireless efforts in being paragons of excellence and serving as inspiration to others.

This yearender issue, features a new set of trailblazers, tastemakers and thought leaders who exemplify how great it is to be a Filipino; the ones who break the glass ceiling; the innovators who have taken their game to a much greater level; the ones whose services to the people are unmatched; the breed of artists who go beyond boundaries to create, curate and cultivate talent, style and diversity; as well as those who are at the pulse of moulding our community’s cultural zeitgeist.

More than just their achievements and the awards that some of them may have received through the years, Illustrado’s list of Filipinos have something in common: they wield influence. “They are able to shape, not only our collective consciousness, but also the way our community moves forward in this region.  Whatever fields these Filipinos excel in, they are at the forefront.  They pave the way. They represent the Filipino,“ Lalaine adds. “We salute all the Filipinos out there. Taas noo, Filipino!”